If it were legally permissible for woman and furniture to marry, I would propose to Todd Manring Designs. If furniture were spreadable, I would eat these items on toast.

I am hopelessly smitten. I stumbled across Mr. Manring's Etsy page by chance. And well I cannot stop thinking about these reclaimed wood pieces. In a few months, as soon as I've saved up enough, I will own this desk. 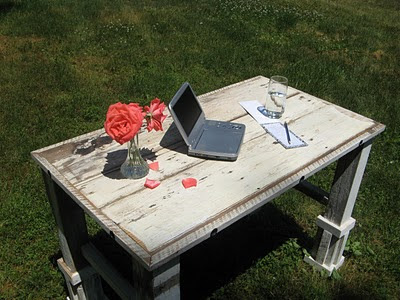 There is nothing I have missed more than having a giant desk. I had a giant desk once, from Ikea, a big, sturdy (and also very cheap) black desk. I moved that desk from one apartment in Charleston to another, only to discover that my new apartment did not have doorways big enough to accommodate such an enormous desk. And despite what you may think of Ikea furniture, this sucker was NOT easy to dismantle. In fact it was impossible to dismantle short of sawing it apart (which would have sort of defeated the purpose). And so I did what anyone would do in such a situation and stuck the desk underneath our back porch. Where I'm sure it has very slowly deteriorated, possibly provided a nice little home for some marsh creatures (our townhouse was on a marsh), and eventually returned to the soil from whence it came. But I digress.

And oh how I want this Todd Manring one. I fall in love a little more every time I look at it. It almost makes me a little weepy, that's how beautiful it is. I know I could find something identical (and seven times as expensive) at Pottery Barn. But that wouldn't enamor me nearly as much. The fact that this is made from old, reclaimed wood is just the nail in the coffin of my love. I have lived in old houses my entire life. Not like mid-20th century old, but in a couple of cases, mid-19th century old. At my parent's house, I am surrounded by furniture from antique and consignment stores. Aside from my admitted love of Ikea (how could you not love furniture with names like Splerg?) I know that when it comes time for me to decorate my own apartment (or house, wishful thinking), I will mainly stick to all things old. Because they just seem more solid. Not simply in the literal sense, although they seem more solid that way too. But more solid in the sense that they have layers and layers of history holding the structure together. They're alive and breathing and so, so beautiful. 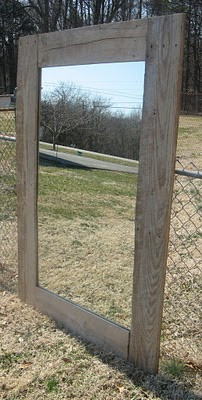 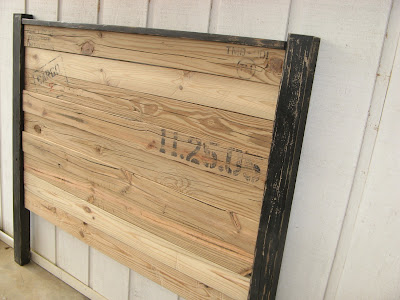 And maybe these trunks/end tables. 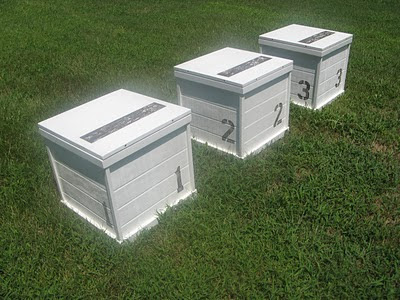 Okay and definitely some of these frames. 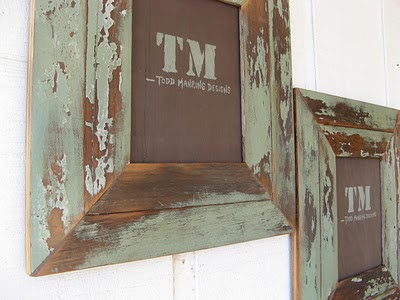 Okay fine! I want literally everything Todd Manring has ever made. I think this stuff is art. It tugs at my heart. It's just something about barn wood.

Maybe because for seven wonderful years of my childhood, I had a barn. An old red barn that smelled like dust and rust and grass. We didn't use this barn to keep animals or farm equipment (although a good bit of antique farm equipment was leftover from previous owners). But it was still such a barn, big and airy, shady and cool, even in the hottest months of summer. It was creaky and peeling, and I spent so much of my time in it or on its tin roof, where I could see every inch of my surroundings, from the tidy, white main house to my grandparent's red house to the lily pad covered pond at the bottom of the hill. My siblings, friends, cousins and I played ping pong and hide and seek inside of it. We created a "family store" and sold candy out one of its windows.

It sounds absurdly idyllic. And it was. For a child with a big imagination, living somewhere with a barn could not have been cooler. I loved that barn.

And it's gone now. The new owners tore it down. I'm sure they had a good reason. It easily could have been about to fall down. They built a new one; a shiny, white barn in the middle of our field (and yes even though it's been 12 long years, it's still our field). But our barn, my barn- the old, red barn, is gone.

And so I think the reason this furniture gets to me is that it's such a nice thought, to think that old barns don't just disappear, that they reappear as desks or tables or frames, in new homes, with new owners. They have a new life, in new places, and become instrumental in creating entirely new memories.

It's so silly and sentimental. But that's what the thought of an old barn given a second chance to be useful again will do to me. And it's why I know I will own some of these pieces one day. To me they are priceless.
Posted by Unknown at 3:21 PM

I have to say, I am so upset that I didn't see this when you posted it! I should have written long ago. You have a definite writer's knack, just like Todd has a knack for making old, new and beautiful again:) We appreciate the love, and if we can do something wonderful for you, to fulfill the need for that warm fuzzy feeling of the days of old...let us know. We love Charleston, and any reason to go there is reason enough for us!:)
Thank you! Stepahnie Manring