I just wrote an annotated bibliography and I feel like my brain is soggy. So to dry it up a little before I dive into studying for my BIO exam (by the way, thanks spring break for ENDING and ruining my life), I thought I'd talk a little bit about cupcakes, specifically the two very different kinds of cupcakes I made last week to take to my sister up in DC for her birthday.

First I went the traditional route and made Apple Banana Cupcakes (which are apparently Polish). 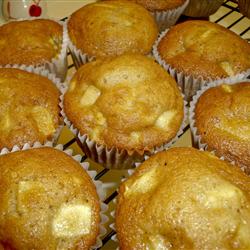 The recipe: (from allrecipes.com)

So one change I made was to substitute half the shortening for apple sauce. I probably could have substituted all of it for apple sauce but at the last second the inner Southern voice in me (and also my mom's outer voice from the other room) panicked about taking all the fat out of a recipe. My mother literally said "Never remove all the fat."And because I'm Southern, I felt like I had been a second away from cutting the green wire and blowing everyone up, that's how monumental a crisis it would have been if I cooked something without shortening. And it might have been. I will never know because I kept some of that delicious, delicious fat (or love sauce as I like to call it). I also substituted half the flour for whole wheat. And used three bananas instead of two. And I made brown sugar cream cheese frosting to put on top, so I could call these very obviously muffins cupcakes. To sum up, easy and mmmmm.

Then I went the less simple route and made crazy vegan, gluten-free, sugar-free chocolate cupcakes. I honestly have no idea what came over me. I am not vegan. I do not have any kind of gluten allergy. I would eat sugar with a spoon if it were socially acceptable. And yet I found this recipe online (on Gwyneth Paltrow's newsletter Goop, which I know, groan, I am insufferable, I want to punch myself in the face) and Gwynnie had in turn found them from the NYC and LA vegan bakery Babycakes. And for whatever reason after seeing that 2/3rds of the ingredients were things I had never heard of, much less seen in the grocery store, I decided I had to make them. Most people would see arrow root and xantham gum and take a pass. But what can I say? I like a challenge. Either that or I just make life way more difficult than it needs to be, because I am a crazy person.


YIELD: 1 dozen
Preheat the oven to 325°F. Line one, standard 12-cup muffin tin with paper liners and set aside.
In a medium bowl, whisk together the flour, potato starch, cocoa powder, arrowroot, baking powder, baking soda, xanthan gum, and salt. Add the oil, agave nectar, applesauce, vanilla, and hot water directly to the dry ingredients. Stir until the batter is smooth.
Pour 1/3 cup of the batter into each prepared cup. This portion will almost fill the cup up entirely. Bake the cupcakes on the center rack for 22 minutes, rotating the tray 180 degrees after 15 minutes. The cupcakes will bounce back when pressed and a toothpick inserted in the center will come out clean. Remove from the oven.
Let the cupcakes stand for 20 minutes. Transfer them to a wire rack right side up and cool completely. Using a frosting knife, gently spread 1 tablespoon of Frosting over each cupcake. Place the cupcakes in an airtight container and store in the refrigerator for up to 3 days.

First let me tell you, gathering these ingredients was a quest, like if the Holy Grail was in Whole Foods and the Knights of the Round Table were gluten and dairy intolerant kind of quest. After considerable time I managed to find everything except for arrow root  (shocking that that isn't easy to come by right?, I know there's nothing I like better in the morning (night, afternoon?) than a nice glass (bowl, plate, IV?) of delicious arrow root). So I asked a Whole Foods employee, assuming I would get a blank stare, but because I was at Whole Foods I got an excited grin and a determined gait as he strode off to find arrow root. But alas Whole Foods was out of arrow root as was every other health food supplier in Richmond (I checked them all). But thanks to a quick Google search I learned plain old flour could be substituted for arrow root (2 tablespoons of flour per one tablespoon of arrow root). So my cupcakes would not be completely vegan anymore, but life would have to go on. Luckily I was not baking them for a group of children where I'm sure at least one anti-gluten mom would murder me in my sleep for slipping her kid gluten.

No butter. No eggs. No sugar (although to be fair agave is nutritionally identical to table sugar, despite what some would say, read my Nutrition textbook if you disagree or just use too much agave and see what happens to your butt). No flour (kind of...) These are the antithesis of Southern larded up cupcakes (which don't get me wrong, I will never abandon). These are obnoxious Whole Foods endorsed cupcakes that Gwyneth Paltrow loves. And I would hate myself for making them if they weren't so delicious.

And as much as I never thought I would say this, perhaps there is a time and a place for vegan and gluten free. Perhaps my butter and egg and dairy loving side can make room for a garbanzo flour side.

Although I do have to say that the Babycakes recipe for vanilla frosting (which you can find online but which I did not include in this post for soon to be obvious reasons) was TERRIBLE. I did not make frosting. I made soup, delicious, vanilla and coconut flavored soup, but soup nonetheless. Apparently when you leave eggs and butter out of frosting this is what happened, because you know what makes frosting not soup-the presence of eggs and butter.

But if this experiment in baking proved anything, it's that nothing has to be all healthy or all unhealthy. There's usually room for the two to coexist. And they kind of have to, because if you leave out one you have soup frosting and if you leave out the other you have a diet full of shortening. Neither are good options.
Posted by Unknown at 8:59 PM