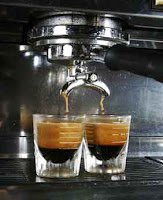 So a couple of weeks ago, I began a job at a fabulous (yes I may be biased, but it's still fabulous) new gourmet market/cafe/sushi bar/sandwich bar/coffee and tea bar hybrid. Yes it sounds like a cluster f**ck, but it's really quite lovely. I mainly work behind the coffee bar, working the register, making coffee, preparing espresso and tea. And honestly, I love the job. I've worked as a barista before, and without question that was my favorite job (as in paying job, not internship) ever. It wasn't necessarily the pay or the location, but the actual work, the simple act of making coffee drinks, as strange as that might sound. And it's the same this time. I've never opened a place before and the hours are crazy and there are unexpected snafus and crisis (crises? crisises?), but I get the same basic satisfaction out of work. And the funny part is that this place is super close to campus, as in practically on top of it. Honestly that's a big reason I wanted the job. I love the CofC campus. I think it's the most beautiful campus in the United States. And no I do not need to visit every campus in the US to know that (I've maybe visited six...four?), I just know it in my Charleston loving heart. I walk through the Cistern, or down Glebe, and I feel safe. I may be a graduate but it's home. I really hope it will always feel like that, that the Stern Center will always give me a weird sense of peace in the midst of its fast food kiosks and student rooms. But anyways, as a result of my work place being on campus, we get a lot of professors in there. And today I had not one, not two, but count 'em, THREE of my former English professors come in. Each and every time, they were very nice and friendly, but I couldn't help wonder, what are they really thinking? Here I am, a very fresh graduate of the English department, countless hours of Shakespeare and Milton and Fielding stuffed into my brain, pages and pages of fiction written and discussed, and what am I doing with all of this literary training? Absolutely fricking nothing. Customers do not ask about Blake or Eliot when they order a latte. I don't dole out sonnets with my jasmine teas. My life right now couldn't be farther from academia or the literary establishment. And it may be self-centered, but I just feel like my professors must at least be a little confused/disappointed/angry. Do they wonder if I lost it, simply gave up all things English in an overstressed, overstimulated post-graduate frenzy? Or do they wonder if that's really the only thing a person can do with an English major these days-go work in a coffee store, i.e. English majors are completely worthless? The answer of course is none of the above. I'm not devoting my life to the coffee business. But honestly it's tempting. I loved college. I love reading and learning in a really dorky way. But to make something with your own hands is rewarding in a completely different way than any book or paper can be. It's not better, it's just different. And it's been exactly what I've needed lately, kind of like an R and R for the mind. I'm tired of thinking, of researching and stressing. There's a peace and a simplicity in my work. It's hard to explain, but when I make a perfect cappuccino, that's a pretty damn great feeling. To steam the milk perfectly, create the right ration of foam and milk, gives me this weird natural high that no hot beverage should give someone. I love when my teas come out right, when they're seeped just long enough. I love when a customer tells me they love the coffee I've ground and brewed. I love adjusting the espresso grinder in tiny increments until the espresso runs just right (not too fast, not too slow, around 23-25 seconds). I trained on that machine for like 20 hours, and I can tell you that making a good shot of espresso is anything but easy.I love that my hands have already taken on wear - a tiny callus on my wrist from when I test the heat of the milk pitcher, cuts on my fingers from various barista related tasks, burns here and there. There's a different kind of tired after you've been on your feet all day, working with your hands - a tired that's heavy but free of any kind of mental or emotional fatigue. I'm not an artist. I don't do crafts, but weirdly enough I've found my own sort of craft with my little espresso bar job. It's not high fallutin' or intellectual and that's why I love it. My professors may be disappointed, but after sixteen years of school, there's nothing I need more right now than to work with my hands on a daily basis, to stop thinking and to just to create something tangible and real (with a dollop of froth on top of course).
Posted by Unknown at 9:08 PM No comments:

explaining my leave of absence

So I haven't written anything in more than a month, and I've told myself a lot of reasons why - first it was finals insanity (a distant blur in my memory now - all i recall is a haze of caffeine, sleep deprivation, and a constant desire to throw things at noisy people in the library), then it was graduation and all of the graduation chores and events that came along with it, and then it was a new job (full time for the very first time in my life, I really am a kind of adult now, emphasis on kind 0f). But all of those are basically cop outs. I haven't written anything, because to write would be to process, and to process the events of the last month and the ones coming up in the not too distant future is something I haven't even wanted to attempt. And I'm not sure even if I had attempted it would have helped. I'm still not sure. And before I started writing this, every part of me wanted to curl up in bed instead with my Felicity DVDs. But I needed to at least write something, to start this big, scary (TERRIFYING is more how it feels in my head) process of saying goodbye to college. I'm going to keep things short for right now, take baby steps, but all I can really say with any definitiveness at this point is that we've been lied to. There's this collective opinion in society that there are normal rites of passage in life, and that these things may be a little poignant, a tad sad, but that they're routine and necessary and easy. The way I figure it is that at some point, adults must make a decision to lie to future generations about growing up, or at least decide to gloss things over, tell the sugar coated version. And honestly who can blame them? Because would anyone grow up if they knew how much it hurt, how disorienting and jarring it would be? We'd all just stay emotionally put at nine years old, a bunch of overgrown children sitting around in sand-boxes, blissfully unaware of things like graduations or careers or endings. But we were lied to; we naively filled out the right forms and took the right classes and made little homes in the colleges of our choice. And then poof its over, the lights go down, the props are removed and we're shoved rudely out into the harsh light of reality. Sure, that shove is disguised with a distinguished looking diploma and a fancy ceremony and all of that pomp and circumstance, but at its core, it's a shove, a push off a cliff when we least suspect it. And these last few weeks I've just been trying to deal with that feeling of being pushed over a cliff when I least suspected it, when I was just trying to enjoy the view. It sounds melodramatic, but I feel fairly confident in saying that anyone who has graduated from college or high school or just undergone any big change in life understands what I mean. We're led to believe that graduation is a neat and tidy punctuation mark on this rambling, run-on sentence called college. It's supposed to be a moment, a period, open and close. But that's the lie. We don't cross a stage and magically feel okay or confident or sure of anything at all. We don't take our diplomas and with a single glance, a tearful smile, say goodbye. These parts of life are not what we would like to think they are, clearly defined actions with a beginning and an end. Saying goodbye, moving on, letting go, graduation - all of these things are anything but defined. They're stubborn in their refusal to be tidy or polite. They hold on to us with a ferocity we couldn't have guessed, and they stay with us. But we still try to fit them into these nice little boxes, because it's expected, because graduation is supposed to be a one day event, captured for ever on our mom's cameras. And so for the last few weeks I've been trying to think of graduation in just those terms, and when I couldn't, when it kept hurting, days after I crossed the stage, I just went into avoidance mode. And now, I guess I'm just trying to accept that it's going to be a process, one I may well be going through forever. These pivotal growing up moments are not easy, they're not simple. Just because something is common doesn't make it routine. If we were really honest with ourselves we'd admit that growing up really just a series of heartbreaks, some tiny, some huge. It's important to grow up, it makes us better, but let's just come out and say it - it hurts like hell.
Posted by Unknown at 12:02 AM No comments: