I am officially "moved-in" to my new apartment. Which makes it strange that I'm writing this from the comfort of my parent's bed (don't worry, they're not in it, or here for that matter since they're both out of town, I'm not that regressed).

There were a lot of reasons why I wasn't ready to spend the night in my apartment. Valid ones too. My linens weren't washed, and I don't like sleeping on barren mattresses. I had no clothes packed, or toiletries. My kitchen was empty. There were still things to be unpacked and organized, routers to be bought and connected, and who can sleep in a messy, half-finished apartment without internet?

But my super not-so-secret, top priority reason is that I needed one more night, one more night in my parent's house before I ventured out into the great wide world of apartment living, which I think makes me officially the lamest 26 year old alive. I expect a commemorative plaque with that title to arrive any moment.

Here's the thing. I am thrilled about my new apartment. It's in an old pre-war brick building on a gorgeous block of Monument. The building is ramshackle and slightly falling apart, but my apartment, well I just love it. Not because it's fancy-the kitchen is so small that if I gain any weight I may have to stop using it. The closet is so small that I can fit three dresses and one pair of shoes in it, if I squeeze them. But there are wood floors and these enormous windows that look out onto Monument and fill the place with light. The living room is big and spacious and the bedroom is small and cozy. When I visited it way back in September there were dirty hippies living there (or so I guessed judging by the state it was in), but I instantly knew it was the right place, because it spoke to me. I saw through the grime and Bob Marley posters and knew that with a little paint, a lot of cleaning fluid, and some creative decorating it would be perfect. And it would be mine. And a 26 year old woman needs that, somewhere that is hers, somewhere to live out all of those That Girl and more recently, Friends, fantasies-a place to be young and independent and footloose and fancy-free.

I can't have that at my parent's house. And I knew it was time to move on. But still, tonight, unmistakably, alongside my considerable excitement, there's this tinge of sadness. I looked in on my old room, with its bare floors and big empty space, and I couldn't help but feel, well, sad.

Change is sad. And that's just the truth. And it should be. There's not a lot I know with any kind of authority. But I feel confident saying that change has to be sad, for it to matter in any real way in the context of a life. We feel change deep in our metaphorical hearts, and even metaphorically, that heart works the same as its literal counterpart. It's a muscle. And in order for any kind of change or growth to happen, for it to get stronger, there has to be pain. You've got to feel it down to your bones, and it's got to ache.

You know how you can convince yourself that you can get fit with exercise that's "easy"? Honestly I spent years thinking that. I would do any kind of exercise except the kind that hurt. And I never got fitter or stronger. I never physically changed.

And it's just the exact same way with change. If it's change that matters, if it's a change that will make you better, will make you stronger or newer or different, then it's going to hurt. Tonight I'm a little sad about this new step in my life. And thank God for that, because it means I'm doing the right thing.

Because when it comes down to it, we have two choices in life. We can always do what's safe and easy, and stagnate. Or we can take a deep breath, and walk straight into change, and the sadness that precedes it, with our eyes wide open.
Posted by Unknown at 9:28 PM 1 comment: 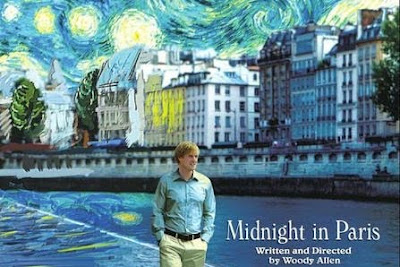 I watched Midnight in Paris last night, and I think Woody Allen snuck into my brain, stole my identity, and then rewrote me as Owen Wilson's character. It was just such a beautiful love letter of a movie, sweet and charming, and just full to the brim with the feeling of not simply Paris, but what Paris can do to a person, particularly if that person is overly romantic and nostalgic and sentimental about such things.  I feel exactly the same way about Paris that Owen Wilson does in the movie, that it's more or less perfect, and that the only thing really up for debate is not whether or not it's beautiful, but about when it's  most beautiful, during the day or at night, in the sun or rain. And like his character I would give my left foot to go back to Paris in the 20s, to meet the Fitzgeralds and Hemingway, T.S. Eliot and Picasso, Dali and Gertrude Stein. When I studied abroad in Paris, my school was right in the heart of Montparnasse, and every day I would walk past all of the old cafes, Le Dome, La Coupole, and just think about what it must have been like, to be in a city so bursting with genius and passion and everyone so consumed with art and creative expression, but still full of life, ready at a moment to go out drinking and to parties or to the South of France.

I could write about Paris today, six (SIX!) years after I left it, but Paris shouldn't exist in faded memory. It should be vibrant and colorful, right at the surface of things. So I turned to my old mass emails I saved from my time there, and I found one that sums up that lovely city and all the love I had at 20, still have at 26, and will always have, until I'm old and gray