For three days this week, I helped my sister and her husband take care of this little munchkin, my beautiful niece Lemma, 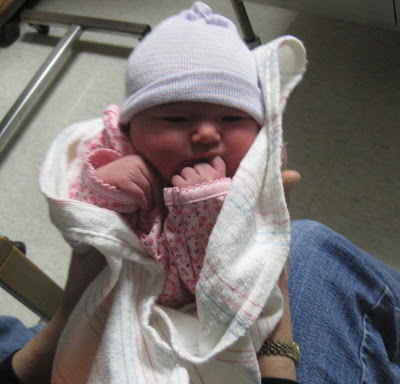 And I came to one very deifnitive conclusion; having children is perhaps the most insane thing people can do. I say this as someone who has for years now claimed to want FIVE kids. You see, I've been a babysitter and a nanny for over half my life now. I thought I knew something about kids. Sure they can be a little rambumctious, but they go to bed pretty early. At least you get a break at night right? But I'd never taken care of a newborn before. After just two nights spent in an apartment with a newborn, I now know I knew absolutely nothing about infants.

These little 8 pound creatures will dominate a household. You can have three fully grown adults, and the tiny, 8 pound baby will win every single time. The adults don't even have a fighting chance. Sure, babies this age really only have three needs, to be dry, to be fed, and to sleep a lot. But the thing you don't realize is that all three of those needs have to be met almost CONSTANTLY. There's no lag time where the baby is just chilling. Either the baby is hungry or the baby has just pooped (and my GOD I had no idea babies pooped that often, how is it even physically possible that in this tiny little 8 pound body there is that much POOP?, and yes it is my goal to say poop as often as possible in this post) I nannied for a one year old and I thought I understand the whole no verbal communication thing. But at least in one year olds there are other signs other than shrieking and flailing to tell you what they want. They can point or rub their eyes or reach for stuff. But tiny little newborns have none of those abilities. And did I mention the fact that you apparently give up sleep when you decide to have a baby? I had no idea that sleep was something you could just give up, like alcohol or Diet Coke or cheese. But from what I gathered that's just part of the deal.

How have people been doing this since the beginning of time? How did one generation not just go, umm, guys, about that whole baby thing. Do we really want to be held hostage by a tiny army of newborns? What's so great about that whole procreation thing anyway?

But just as I was beginning to swear off childbirth, just as I was starting to think that there must be some sort of parent amnesia that allows people to have more than one child (sweet Jesus to think of that Duggar woman who has 19!), I saw the way my sleep deprived, still tired from that whole 30 plus hours of childbirth thing, sister looked at her daughter. And that my friends, is the very reason for unconditional love. If not for that whole unconditional love thing babies across the world would be thrown out of windows on a regular basis. Because without that love there's no way you could do it. There's no way you could give up sleep and showering and your old life and throw yourself completely at the mercy of something that poops that often.