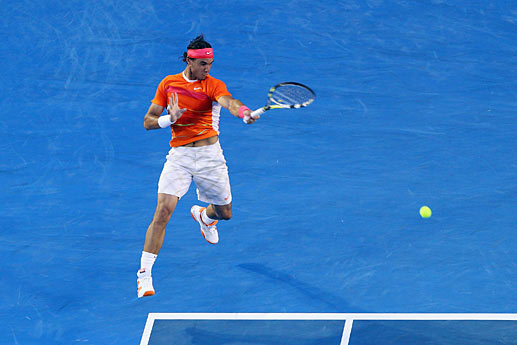 While in Thailand I missed three tennis grand slams. Now three may not seem that high of a number to any non tennis fan, but there are approximately four grand slams per year. To miss three in a row absolutely killed me. I missed the sight of tennis socks covered in burnt red dirt during the French. I missed the crisp, elegant, almost blindingly green grass of Wimbledon. I missed night matches at the US Open, and let me tell you, as a tennis fan, it doesn't get better than a night match at the Open, all of that excitement and intensity. You're sitting at the edge of your bed in the dark during a tie break in the 4th set and suddenly you realize it's 2am. But you don't turn off the television. Hell, you don't blink. You are fully apart of that moment, much more so than any sporting event taking place in the crowded light of day.

Tennis is one of my greatest and most abiding loves. I am a fan, and in the immortal words of Almost Famous, being a fan means loving something so much that it hurts. And so to miss those three slams, well it was brutal. And so I've been feasting on the Australian Open, on that neon blue court, on the narratives of players on their way up and those on their way down, on a hot Australian summer in the middle of our winter, on aces and forehands and volleys. It doesn't matter that half the matches come on after midnight east coast time. It doesn't matter that my two favorite players both lost last night because of injuries (Roddick and Nadal if you're curious). Tennis and me, well we have an unconditional kind of love.

I love this sport. And for two weeks, four times a year, I live for it.
Posted by Unknown at 10:43 PM

you were in Bangkok in September... no Bangkok Open?! Nadal was there!!
- Anne

i did go to the bangkok open! but sadly he was no there, he pulled out right before the tourney with an injury :(