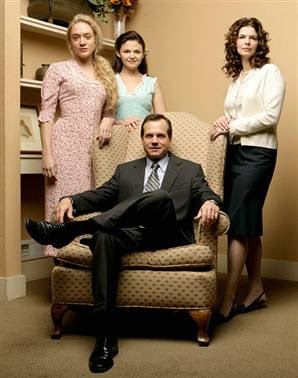 I was trying to describe Big Love to my mom the other day. "Isn't that the show about polygamists?" she asked, in a dissaproving tone. "Yes," I replied, but... And then I found myself struggling with the words to defend these characters. They were polygamists, but they were multifaceted and loving and sad and beautiful. I was defending a fictionaly portrayal of a lifestyle I find in real life repulsive. And my God, doesn't that just define great television, hell, doesnt that define great art? To take a character or a lifestyle or a religion even, that in any real world setting you would judge, and then make you want to defend it all, make you fall hopelessly in love.

I've fallen head over heels into the world of  HBO's Big Love. Like last season's Anna, despite my intial reservations about these wacky, polygamy loving Mormons, I've been unable to keep myself away from their world. Oh, and what a world it is. There's something positively Shakespearean about the story of Bill and his three wives, a family hanging somewhere in the middle of the modern (and at least in this show, corrupted) Mormon church and the ultra-fundamentalist Mormom compound run, at least until last's night's episode, by the false and super creepy prophet, Roman Grant. There are Big with a capital B issues raised in Big Love, life and death and God and religion and family, and how all of these things can intertwine and alternately heal and destroy, sustain and isolate.

And then suspended amongst all of these things is the rather ordinary love present in the main family, despite their completely unordinary lifestyle. When they're not trying to bring people up on murder charges or finding dead fathers in the freezer, these people, despite their aversion to alchohol and curse words and well, the whole polygamy thing, are poignantly normal. They bicker and they squabble and they do dishes and watch the kids and they love each other in the painful, confusing ways families do. And you want to judge these characters, you really, really do, but like I said before, you just find yourself rooting for them. You root for sweet, spunky Margene and calm but cracking underneath the surface Barb. And Nikki, who has become my absolute favorite character. She's childish and selfish and mean (one of my favorite moments of Season 3, Nikki tellling a newly blonde Margene that her hair makes her look like a "complete whore"). But there are these moments when she's human and vulnerable, and you realize how much was taken from her, how the same religion that provides her with faith and love has also taken away so much of her childhood and innocence.

And in the end, that's kind of what Big Love is about. More than being a show about polygamy or Mormonism, it's a show about the dual nature of religion, the blessing and the curse of it. So much of these characters' lives are decided by how they interpret God. So much love comes from their God, just as so much hatred and exploitation does as well. It's that interpretation of love that Big Love wants to explore, and whether or not anyone, any church, or any government has a right to tell someone that his or her interpretation is wrong. Here in the real world it's so easy to say that of course someone or some church or some government can tell polygamists that they are wrong. Here in the real world it's so easy to judge. And I am by no means defending or supporting polygamy. But that's the beauty of Big Love. Because ultimately I want to defend these characters.

Whether it's the mobsters of the Sopranos or the alcoholic, violent Tommy Gavin on Rescue Me, great television makes us care about morally qustionable or just plain morally reprehensible characters. Big Love is great television. The story is great (did I mention that whole Shakesperean aspect because I mean really, what other TV drama gives you power struggles and questions of usurpation and mothers trying to kill sons and sons trying to kill fathers?). The acting is great. The opening credits are even great! I just can't help myself. I love these crazy Mormons. And I can't wait to see what happens next.