note to self: INAPPROPRIATE 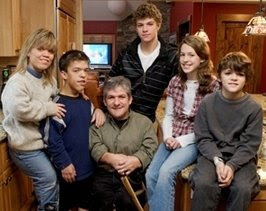 I feel like I have been very honest on this blog since its very beginning, and so it's only fair that I continue that trend. I have a severely inappropriate crush on Jeremy Roloff from the TLC show "Little People, Big World." (pictured at the top center of the above picture) I remember the first time I saw the show. I saw the then probably 15 or 16 year old Jeremy, and thought to myself, that boy is going to be smokin' hot one day. But I let it go, because he was 15 or 16, I was probably 20 or 21, and well that's illegal and gross. But TLC seems intent on corrupting me and every other pervy older woman out there with its new add campaign for its Monday night block of programming. I searched and searched for the actual commercial but if you've watched TLC anytime recently then you've probably seen it. The commerical is for Monday night on TLC with Jon and Kate Plus 8, Little People Big World and the show about the weird mormons with 17 kids who all wear clothes straight out of Laura Ingalls Wilder. And at the end of this commercial, there is a super, gratuitus, zoomed in shot of Jeremy, now 18 and fully grown up, and just, well beautiful. Like they might as well have had him take his shirt off. So now I just have the hugest crush on him, and it's not my fault because TLC with their evil commercials clearly preyed on women like me, women who should know better than to crush on boys who are still in highschool, but who have been blindsided by the sheer hotness of this boy. And so now I just feel dirty and conflicted about the whole thing. All I can say is damn you TLC! I already have enough issues with my love of Zac Efron and Shia LaBoeuf (and they're 21, only two years younger than me!). The last thing I need is to dwell on someone who is barely out of the jailbait sphere. So stop those commercials right here and now. I know this boy is eye candy, I know he's a good way to end a commerical. But for the sake of us all, just end on a shot of a Mormon or something. Because there is nothing sexy about that family.
Posted by Unknown at 9:53 PM