it must be love. 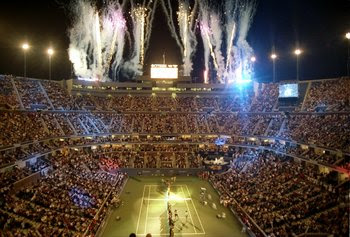 There's always something magical about the change from August to September. Maybe it's the new crispness present in the night air. A cool breeze running through a warm day, suggesting things to come. Yellow pencils and pink erasers in the aisles of Target. Scarves and coats pulled out of moth boll scented storage. There's a part of all of these things that make the slow, hazy climb from summer to fall feel so especially acute the first days of September.

But nothing fills me with more end of summer, beginning of fall magic than the two weeks of tennis at the US Open. The ads for the tournament this year use the catchphrase, "it must be love", and well, judging from my irrational, besotted behavior while the US Open is on, it must be. How else to explain the hours upon hours I spend watching grown men and women swat little yellow balls across a net at each other? During the US Open, time becomes an unnecessary way to measure the days. Instead hours and minutes are counted by points and games and sets. I know that evening has arrived when the lights come on and flood Arthur Ashe stadium with a preternatural glow. During the US Open, I go to bed thinking of tennis and wake up thinking of tennis. Whereas other days are spent on to do lists and calendar schedules, US Open days revolve around order of play. I become a part time meteorologist, checking in on the weather in NYC, inspecting satellite images for tell tale signs of rain, that most persistent and relentless foe of a tennis fan. For two weeks at the end of every August and beginning of September, I live and die by scorelines. I dissect draws and curse the gods when a favorite goes out. I shout at my television and cover my eyes. If I have long finger nails going into the US Open, they are completely gone at the end of the two weeks. I find myself caring desperately about a wild card or a qualifier who until that week I may never have heard of. I will aging players that I've followed for years to fight. I can't tear my eyes away.

It must be love. Because why else would I forsake all other television for two weeks. I'm a TV person. Normally I chart my weekdays by what TV is on that night. During the US Open I could care less. My television is on ESPN 2 from 11am until sometimes well past midnight. I watch tennis on mute while I work. I watch it while I eat. I poke my head out of the shower to hear the score. I submit friends to this insanity as well. I arrange plans around the US Open. I beg off responsibilities. It isn't normal. It isn't sensible. But my God it's love.

And why? Why would I love a tennis tournament so damn much? Why would I let it break my heart or fill me with exhilaration? I love all tennis, and follow the other grand slams almost as closely, but there's something about the one in New York. Maybe it's because it's in the same time zone and I don't have to wake up at two in the morning to watch a match like I do for the Australian Open. Maybe it's because the US Open is my country's open, and I'm simply doing my patriotic duty. But I think the real reason is that while all tennis is about stories, the US Open always knows how to tell a great one.

There's a million overlapping narratives present in any grand slam, stories that collide and intersect and meet in the middle over the course of two weeks. I always try to explain this to non tennis fans. It's why I love this sport so much. In tennis, there's the story of the calendar year, this grand, messy Dickensian arc, with a shifting point of view and a million different voices. And within this story there are spectacular flame outs, injuries, come backs, rivalries, talent squandered and promise finally realized. There are heroes who dominate the field, villains who upset the favorites, and journey men- day players who show up and do their best and who are good, brave even, but never great.  There are the stories of the smaller tournaments, slim novellas that may lack heft but which can contain beauty or ruin nonetheless. And of course, there are the stories of the majors, and the thousands of stories contained within.

And at the US Open those stories just seem to be amplified. Maybe it's the bright night session lights, or just the energy of NYC, but every story in New York feels vital. I love how you can immerse yourself in a grand slam the way you can in few other sporting events. It's not just a diversion on a Monday night or an afternoon in front of the TV. As a tennis fan, for two solid weeks the stories of a grand slam become a part of your life. And like I said before, there are hundreds of different narratives, heated battles carried out for hours on outer courts, quick and ruthless dominance by the top players on the show courts. There's the story of the elements, mercilessly hot days where even the fittest players become staggering zombies, where tennis stops being about a ball and a racket and starts being about who has the strongest will to survive. There are the days when upsets seem to get carried by the wind, gripping the whole tournament as unseeded players find a way to change their careers, change their lives, and play above themselves for a few short hours, defeating higher ranked players who everyone thought would win. There are the aging men and women, who come into every tournament knowing it may be their last, willing their bodies and minds not to yield, not just yet.

There are the epic chokes and the equally epic comebacks, guys who squander a lead or guys who crawl their way back from the abyss. This is tennis at its highest stage. There's no room to hide. And you watch so many players fail to live up to a grand slam, who have all the talent in the world but who for some reason can't find a way to use it. But then there are the players who have squeezed every ounce of talent out of their game, whose passion and heart and fight carry them from round to round, garnering fans along the way. And of course the fans are part of the story. They are the Greek chorus to every match, particularly the ones that go the distance. Best of five set tennis is what I believe makes this sport so great. Because there's nothing like a fifth set in a grand slam tennis match, where the rest of the match is rendered irrelevant. Because no matter how long it's been or how the games have played out, suddenly these two players are on even ground, and it's no longer just about technique or fitness. It's more than anything about who can mentally pull it off, and the crowd is such a huge part of that. I like that in tennis fans sit during points, because there's nothing quite like the sight of tens of thousands of people simultaneously exploding out of their seats.

And there's no story better than the story of a night match at the Open. This is what a tennis fan lives for. It's pure electricity. It's the antithesis of Wimbledon, a tournament I also love, but one which is about tennis as poetry and art and precision. A night match at the US Open is about tennis as theater and heart and fight. I have so many memories of watching night matches at the Open, from back when I was just a kid. I can remember seeing the clock creep past midnight and beyond, knowing I had school the next day, but not caring at all. I can remember jumping on my bed, cheering vociferously but mutely (it was the middle of the night after all), or pulling my hair out with frustration. I can remember matches that ended in tears (on my part and the part of the players) or matches that ended in giddy relief.

The US Open is a story that I come back to year after year, and will always come back to. And of course there are the days where the matches are routine and the commentators are boring. There are the days when my favorites lose. But every day begins the same way, as a blank state. And as a fan you know that every day, every match, every game, every point, there is the possibility for greatness, for a moment that is bigger than the players or the venue or sport itself. For two weeks we all live on the brink of that greatness, and sometimes we reach it.

So yes, it must be love. And it always will be.