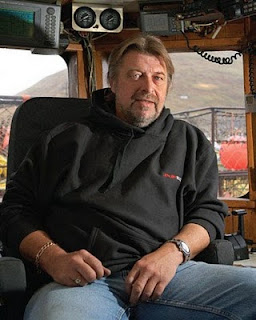 Before I left for Thailand, I went to Barnes and Noble to stock up on some TV on DVD. I knew that more than likely there would be no television in my apartment for the six months I would live there. In fact as I discovered when I arrived, there was a TV, which had approximately six channels, most of which exclusively showed the ultra-dramatic, alternately violent or slapstick Thai soap-operas. I never had any idea what was going on in these shows (which were also showed on most public buses), except that someone was at all times being kidnapped or courted (it was hard to tell which was which). And to be fair I once saw a dubbed (from English to Thai) Kevin Sorbo sci-fi film on one of the channels.

My point is I had to improvise. So at Barnes and Noble I bought several seasons of shows to watch on my computer while I was away. Two of these seasons were of the show, Deadliest Catch. I used to make fun of my friends who watched Deadliest Catch. What in the world could be so interesting about crab fishing of all things? But as is usually the case with me and reality television (hello Top Chef, Project Runway, Work of Art, pretty much any Bravo competition show) my pre-judgements were proven woefully wrong. Deadliest Catch is quite simply awesome, one of the most compelling shows on television. So I thought that it would be the perfect show to have with me in Thailand, a frigid blast of salty sea air in my new tropical home. I thought I'd watch my seasons once, and that would be that.

I probably watched my Deadliest Catch DVD seasons five or six times over the course of five months. I kept coming back to them. I can't really explain it, but out of all of the shows I brought with me to Thailand, from Arrested Development to Everwood, there was something about Deadliest Catch that broke through the loneliness of being the only farang in my town, the isolation of not having any other native English speakers to talk to on a regular basis, and made me, as I sat eating Corn Flakes in my little dormitory apartment, feel safe. Maybe it's because as a viewer of this show, you can't help but feel like you know these guys, despite the fact that in real life, if you saw them at a bar you would probably slowly inch away out of a mixture of fear and deference (and perhaps an aversion to tobacco smoke). So when I popped in these DVDs after a long day of shouting over noisy groups of Thai children, it wasn't just watching a show. It was like catching up with old friends. Sure it was always the same stories and jokes, but isn't that always the case with old friends anyways?

I got to thinking of all of this because tonight is Captain Phil Harris' last episode. I didn't know the man, probably wouldn't have had a single thing to talk about with him if I had. And yet I was deeply, profoundly sad to hear about his passing, and I know I will spend two hours tonight crying in front of my television while as a viewer, I say goodbye. It's silly, to be sad over the death of a person you've never met. But out of everything bad you can say about reality television (and I've said plenty), you can't deny that there is something beautiful and positive about making viewers care deeply about real people, about forging this slender, silly little connection between worlds that would have otherwise never coincided. I think that caring is always a good thing, even (and I can't believe I'm about to say this) if it's a small town Ohio teenager caring about those vapid Kardashians. I like things that make the world smaller. I like things that push us together in ways we wouldn't have guessed. And so I'm grateful for the fact that a reality television show has made me care enough about Phil Harris to be very sad about the fact that he's gone. Deadliest Catch, for fifty or so minutes at a time during those incredible, but often very lonely months in Thailand, brought me home. And for that reason alone I will watch tonight and pay my respects.

And one final thought. I have been incredibly shocked by how decent Discovery network has been through all of this. If a Real Housewife keeled over, you know that Bravo would market the shit out of that thing. It would be on billboards. Every single preview would mention it. Just think of the way TLC has handled the Gosselin divorce, squeezing every last ounce of humiliation and sadness out of that thing like the cash cow it is. But Discovery hasn't done any of that with this. It's been tasteful and respectful and just, well like I said before, decent, and decent isn't something you associate with the entertainment industry all that often. It's obvious from how they've treated this that there was real and genuine love and respect between the people at the network and Phil Harris, because not once has it feel like they've been trying to exploit his passing in any egregious way. And that's really impressive to me. Bravo Discovery. You've gained my respect by showing in many instances yours.
Posted by Unknown at 9:01 PM

If Only She Had Applied Herself said...

I join you in missing Captain Phil tonight. I've often wondered why this middle-aged mom from South Carolina was so taken with this show, but it's hard to argue with greatness. I'm in awe of what they do, and it makes me realize how cushy my life really is. RIP Captain Phil!!