I think there's a tendency to want to come home from life changing, perspective shifting experiences and want to change everything. You know, sell all your earthly possessions and move to a cabin in the woods ala Thoreau. Although come to think of it Thoreau not only returned home from Walden on the weekends but had someone do his laundry. Which maybe sort of gets to the whole point of what I'm saying. Humans are contradictory creatures. We can want to be good and to do good and be less selfish and less concerned with things. But part of the very definition of human is tied up in being selfish and liking things. If we could happily live naked in a creek munching on dirt then we were probably meant to be born a guppy.

So even though Haiti in many ways changed my idea of who I want to be and how I want to conduct my life, I'm still me. And part of that me is that I love to shop. I like things. And I don't think that makes me a bad person. I just think it makes me a person period. But I do think that while it's probably not wise to incinerate your money and ditch your car Into the Wild style, it is possible to take the things and habits you love and do them in a more thoughtful, conscientious way. Which brings me to my new favorite store, Ten Thousand Villages.

Ten Thousand Villages has been in Richmond for forever, and I've shopped there from time to time throughout most of my life. But it has lately become my absolute favorite place to shop. I think part of it has to do with that unique reverse homesickness that strikes when you've traveled a good bit but are at least for the moment back home. After Thailand that homesickness has been especially acute. But as I browsed the aisles of Ten Thousand Villages for the first time since I'd come back to Richmond, letting my fingers rest on mirrored silk blankets from India and delicate white marble book-ends from Bali, I felt like inside the walls of this store, I'd found a way back to my wanderlust home. It was this weird inversion of what it was like to go to an English language bookstore in Paris or eat McDonald's in the middle of Bangkok, transported from one world to another through nothing more magical than a table of contents or a french fry. Ten Thousand Villages is absolutely soaked in that kind of magic, and I could spend hours there for that alone, surrounded by physical talismans of so many of the nations I've fallen in love with, tea from Malaysia or woven baskets from Indonesia or colorful Indian scarves.

I also love the way so many of the products at Ten Thousand Villages are made from things you would never expect to be recycled. There's a sense that almost everything there has been repurposed. Nothing feels new in the way a glass at Crate and Barrel feels new, bland and homogeneous (and this is from someone who has done her share of shopping at Crate and Barrel). The things at Ten Thousand Villages feel like they've all been given a second chance to be beautiful, a reincarnation of sorts. Nothing could better exemplify this than this necklace I bought a little while back which I wear constantly. 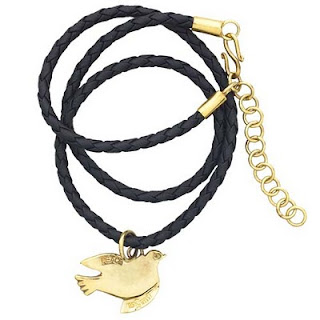 I took the dove pendant off this black chain and put it on a smaller gold one and on a purely superficial level it matches almost everything. But the unbelievably cool thing about this necklace is that the brass dove pendant was made from one of the many bomb casings that litters Cambodia. So not only does this necklace benefit a Cambodian artisan, but in turning this bomb casing into a necklace, something that was designed for violence has been transformed into something beautiful, not only that but a dove, the ultimate symbol of peace. The word peace is written in English on the top and in Khmer on the bottom, and the moment I saw this I thought it was one of the coolest, most powerful pieces of jewelry I'd ever seen.
But if jewelry isn't your thing and you think doves are for sissies, an even better reason to shop at Ten Thousand Villages is that this is an absolutely awesome example of what a non-profit should be. Ten Thousand Villages develops long-term relationships with local artisans in developing nations, buying their goods and selling them in the States for fair prices. They give these people from often very poor countries a livelihood. And no where could this be more precious or important than in Haiti right now. I went into Ten Thousand Villages about a week after my return from Haiti, when I still felt very much like a ragged walking nerve. I went to get my mom a birthday gift, not really thinking that anything from Haiti would be there. But hanging on the wall was this gorgeous metal cross. 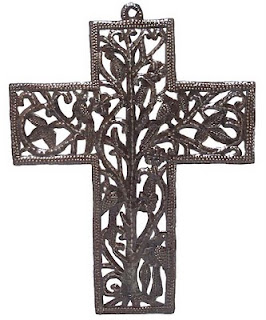 I read the accompanying sign and saw that not only was this the work of a Haitian artisan, but that the cross was made from a repurposed metal drum. I knew my mom would love it and so I decided to get it immediately. As I was checking out, I mentioned that I had just returned from Haiti. The girl at the counter then told me the story of the first time the Ten Thousand Village people visited Haiti after the earthquake. They had long-standing relationships with people in a village called Croix-des-Bouquets. Many of their homes had been destroyed, but the workshops remained intact. The people from Ten Thousand Villages kept asking what they could do, how they could help. The response of the Haitian people- "give us more orders." Help us get back to work and to normalcy. With tears in her eyes, the girl at the counter told me that on the spot the Ten Thousand Village people decided to buy every single product that was in any way finished, for an order of other 2,000 pieces. This cross was one of those.
I'll touch more on this in a later blog, but after a week in Haiti it's hard not to feel completely disillusioned towards the work of huge NGO's. It's hard not to wonder where exactly are the billions of dollars are that have been promised by other nations, ours included. But there's hope to be taken in the work and actions of smaller groups and organizations, of people like those from Ten Thousand Villages who did the best possible thing for the Haitian people. They didn't hand them a giant cartoon check. They didn't give them a meal that would last a day. They gave them a way back to normalcy, a way to go on living, not on welfare but on real, honest work. And that alone will make me a Ten Thousand Villages customer for life.
Posted by Unknown at 9:19 PM