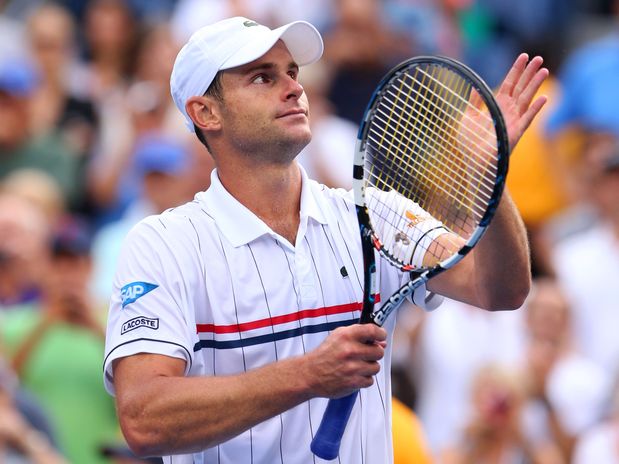 The first Andy Roddick match I can really remember, in its entirety, was a loss.

It was at the 2001 US Open, a quarterfinal night match against Lleyton Hewitt. It's the first tennis memory I have that is completely my own, not a match I watched because my family was watching it, not a match that was on in the background, but a match I was fully engaged in, the match that turned me into a tennis fan.

I was 15. Roddick had just turned 19. I was a teenage girl, so of course I thought he was cute. But there was something else there, this cocky kid who played with so much fight and energy and passion. He lost that match in five sets, but by the end of it, I wasn't just a tennis fan, I was an Andy Roddick fan. I would be one, unwavering, for the next eleven years.

It's fitting that the match that made me root for Andy was a match that he lost, because for the next ten years, I would have to watch him lose a lot. I'm not saying this to knock Andy's career. Every tennis player loses a lot. It's the nature of a game where each tournament can only have one winner. And for every excruciating loss I can remember, I can also remember another ten glorious wins, against Ferrero in the finals of the US Open when he became a grand slam champion, against Murray in the semis of the 2009 Wimbledon, years after everyone said Andy was no longer a real threat for a title. I remember all of those Davis Cup wins, especially the 2007 finals, when Andy helped lead the US to their first victory in years. I remember all of those wins at the US Open and at Wimbledon and the Australian Open, all of the wins in the smaller tournaments, wins that helped him to 32 titles, and to nine consecutive years in the top ten in the world.

Those wins were thrilling and rewarding, and they're why he'll be in the Hall of Fame, why he was the number one American for all those years. But I don't remember those wins with nearly the clarity or the precision or the pride as I remember some of Andy's losses, particularly the 2009 Wimbledon final against Roger Federer.

I only got to watch one tennis match in the summer of 2009. I was in Thailand teaching English for the summer, without a TV or internet connection, so I missed the French Open and assumed I would also miss Wimbledon completely. At the time I was still an Andy Roddick fan, but my love of tennis had grown and expanded in the years since that night match in 2001. I could root for Nadal with almost the same passion and heart as I had always rooted for Andy. And it killed me to miss the best tennis of the year. But then, long story short, I got swine flu. I tried to go on vacation for the fourth of July and then my train crashed (I told you it was a long story) and I got even sicker, and basically I just gave up, and fled to the sanctuary of a fancy hotel in Bangkok to recuperate.

As fate would have it, I was there for the Wimbledon final, a final between Andy and Roger Federer, the man who had made my life, as an Andy Roddick fan, miserable for so many years. I snuggled under the covers of my beautifully soft bed and watched the match. I had watched Andy in two other Wimbledon finals, and he had lost both of them, also both to Roger Federer. As a fan you always believe in your player. You always believe they can win. But it was a big mountain for Andy to climb.

I sat up a little straighter when he won the first set, and then straighter still when it got to the second set tie break. Even after he lost that tie break, I couldn't move. This was a different Andy than I'd ever seen in those two other finals, back when he was in the top 5, back when he was supposed to win. In the 2009 Wimbledon final, Andy wasn't supposed to win. Nobody believed he had a shot. But here he was, hanging with Federer, shot for shot, on and on.

The match went to a fifth set, and then it kept going, all the way to 14-15. Andy had served second in that final set, which meant that every time he served he would have to face a match point instead of merely a break point. In tennis it's the highest kind of pressure. Most people crack.

He didn't. He was playing the greatest player in the history of the sport, and he didn't falter. He didn't fade. He fought, every single point. He lost the match, and I remember watching him during the interviews and ceremony, how much humor and grace he showed.

I've never been prouder to be a fan of anyone. I'm not sure I ever will. My life would have been a lot easier if that first electric tennis match I saw as a 15 year old was a Federer match. The man rarely loses. He's won 17 majors for God's sake.

As an Andy Roddick fan, I've had to face countless match points, countless losses that have left me with claw marks in my cheeks or in tears. There have been brutal losses, first rounds of grand slams, times when he's been two sets up and still lost. I've cried and I've raged and I've wanted to kick my TV.

But through all of it, I've never once stopped being a Roddick fan. I've never wanted to. His list of accomplishments is endless. Every sports writer in the country is currently compiling a list of them. He's had a career most athletes would kill for. But he's earned my loyalty and my respect for the way he's played in his losses, for never giving any less than all of himself. When I watched him when he was a cocky 18 year old kid I saw fight and determination up until the very last point of that night match. When I watched him in this, his last US Open, I saw that same fight and determination, even though his body was weary and broken down. I also saw grace and class, a 30 year old who could have stuck around for a few more years, could have been the kind of player who made it to the 3rd or 4th rounds of tournaments and was satisfied with going no further. But instead he chose to bow out, to leave when he could still fight, when on a given day, he could still beat anyone.

Tennis is a strange sport. In football or baseball, players retire, but entire teams don't. You're never left with what I'm left with tonight, a big, gaping hole in the sport I love, left by the player I rooted for the most. It will be incredibly strange when the Australian Open comes around, and he's not in the draw. I'll have other players to cheer for, other players I support and want to win.

But it won't be quite the same. Andy Roddick will always be the player who first got me into tennis. Through him I really and truly fell in love with this beautiful sport. I'm a lifelong tennis fan now, and I'm not sure I would have been, not sure I would have found it, if not for that US Open quarterfinal in 2001, if not for having Andy to cheer for all these years, through all of his wins and losses.

I am so honored that I got to watch Andy play in his last tournament. It almost felt like this weird little thank you from fate, to be able to be there to show my appreciation in person, to root for him one last time. Eleven years later, at another night match, I was given the opportunity to say goodbye and thank you.

And just in case I haven't made it clear, once more, thank you Andy. Thank you for never giving me a reason not to root for you. Thank you for all of those fantastic wins which made us respect your career. Thank you for the losses that made us admire you. I will always be proud to have been your fan. 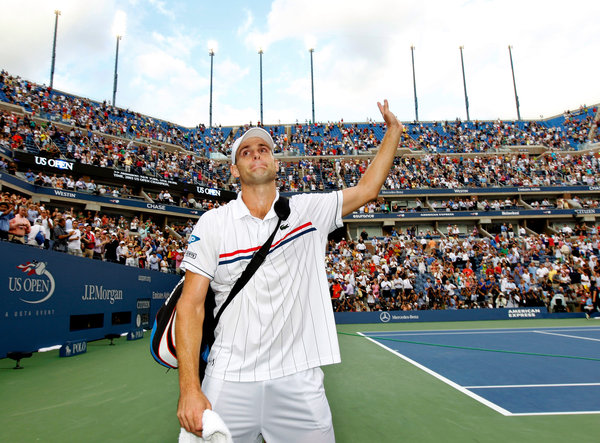