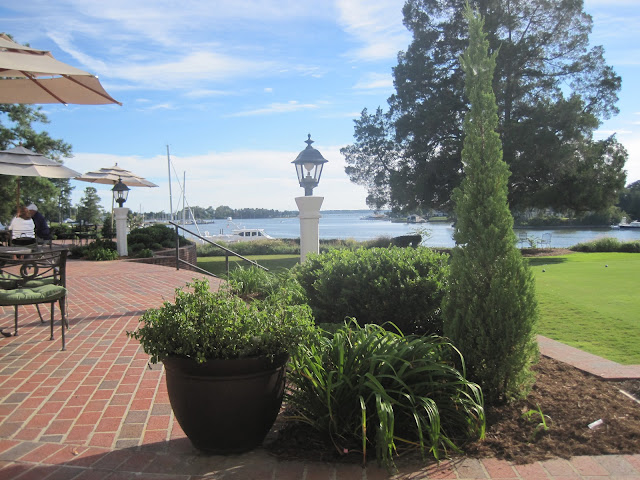 View from the Tides Inn

So it has been a very busy couple of weeks. School is in full swing, and I'm back in the thick of med administration and patient assessments. Life is hectic but good.

This past Saturday the boyfriend and I headed to Irvington, VA. Our one year anniversary was in August, and I, being the spectacular girlfriend that I am (and also humble too right?) surprised Rob with a night at the Tides Inn and a special dinner.

this area is absolutely lovely. We drove through West Point, through Urbanna, over the bridge and down to  Irvington. Along the way was quiet, farm strewn countryside, dotted with little creeks and rivers. It reminded me a lot, especially when we were close to Irvington, of the areas surrounding Charleston, not the fancy pants, elegant city, but the quiet stretches of country down highway 17, where towns grow smaller and fields grow bigger in this weaving maze of water and land.

When I go to water I usually head south, but now I realize there's a whole wonderful world of water northeast of Richmond. And it felt different on the Rappahanock than at the beach, much less Waves beach stores and Brew Thru's and much more quiet produce stands and family farms. Irvington was as storybook quaint as you can get. It felt like the setting for every quirky small town movie or TV show you've ever seen, a salty, Eastern Virginia version of Stars Hollow. 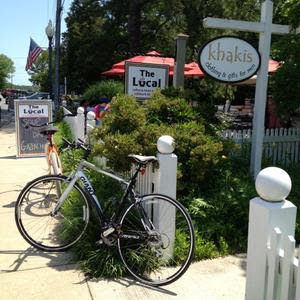 And in the middle of this cute little town was The Tides Inn. Growing up in Richmond I'd heard a lot of reference to the Tides Inn, friends going there with their families, people heading there for parties or weddings. I'd only ever heard good things, and it more than lived up to what I expected.

The exterior is a slightly old fashioned looking hotel that you can picture your grandparents staying in on their honeymoon. But inside it's gorgeous, polished down to every detail, elegant without feeling cold or overwhelming the way really fancy hotels sometimes can. It felt warm and inviting, just the right amount of casual and just the right amount of luxury. Our room was lovely, with windows overlooking the hotel's marina.

Since we were only staying the one night we wanted to get in as much as we could in the afternoon, so we went for a paddle boat ride around the creek (holy GOD did my thighs get a workout, I used to paddle boat when I was a child, and I do not remember it being that much of a workout) and then played a quick game of tennis (mercifully, no other people were around to witness the horror that is my tennis "game"). 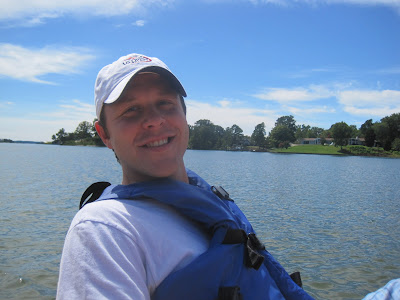 Smiling through the burn

We went back to the room to get ready for dinner and found this waiting: 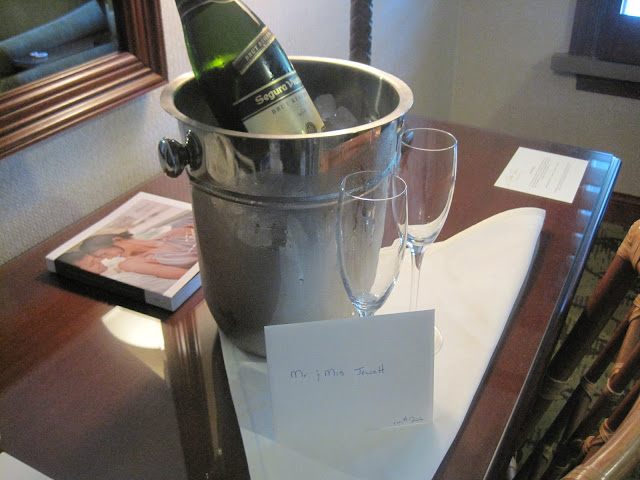 Note that it says to Mr. and Mrs. Jewett, got a nice chuckle out of that one.

Something like this is what separates a good hotel from a great one. When I booked the room I sent an email to the activities department to ask for advice for what to do. I mentioned that I was bringing my boyfriend here for our anniversary, completely off hand, and the hotel took note, remembered, and best of all, gifted us with FREE SPARKLING WINE! If I wasn't sold already, free bubbly would have done it. Tides Inn you got me tipsy and stole my heart.

So my secret dinner surprise was a chartered cruise over the river to Merroir in Topping, VA. Merroir is the tasting room run by Rappahanock River Oysters. I've had their oysters before at home and at local restaurants, and I'd heard nothing but good things about Merroir. Our captain, William Saunders, picked us and another couple (who had moved to Irvington and were friends of his) at the hotel and we boated over to the restaurant with them and William's tiny, Yorkie dog. 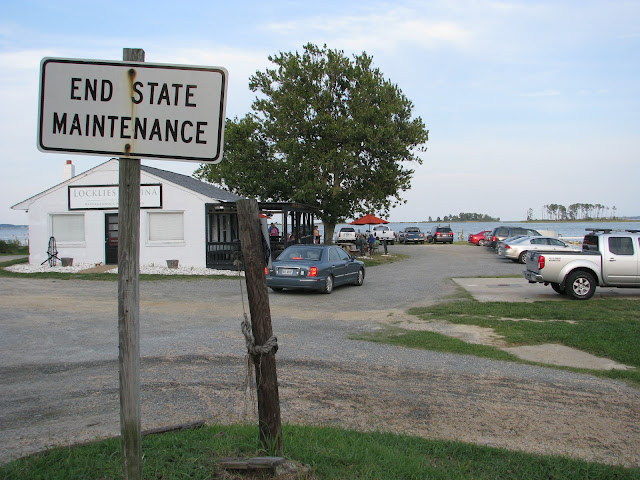 We arrived at the dock outside of Merroir and realized two things simultaneously 1) there was a massive crowd outside the place and 2) they don't take reservations. Luckily they have a bar and seating for bar patrons. Unluckily we waited for two hours. Luckily there was wine, lots of it.

When we finally got our table, it was also to my surprise that we were seated with William and the other couple. When I booked the cruise I didn't necessarily picture a romantic anniversary dinner for two including a slat of the Earth boat captain and his friends, but by that time I honestly didn't mind. Maybe it was because I hadn't eaten since 10 that morning and I would have sat with literally anyone if it meant I could eat. Maybe it was because I had already consumed half a bottle of sparkling wine, a beer on the boat ride over, and a couple of glasses of red. But I think it was also something about where we were, the cluster of picnic tables right on the water, the grills set up right by the tables, the utter lack of pretentiousness or fuss, not just at Merroir but in the whole surrounding area. 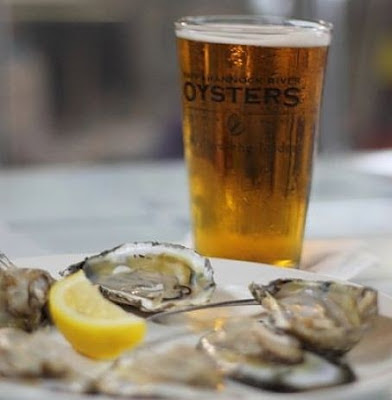 (Disclaimer: not my photo, but it sums up the essence of the place)

Everything felt easy. So I just laughed, grabbed a seat and ordered half the menu (no literally). Seriously we got a dozen raw, local oysters, half a dozen grilled oysters (my favorite, mmmmm). We also may or may not have ordered: 2 grilled ears of corn, an unbelievable crabcake over yummy bread, grilled tuna steak with this bangin' Thai pineapple sauce, shrimp and cheddar grits, and a steak for Rob. They were small plates! In our defense, we had boated and played tennis and had not had eaten since 10. But really everything just looked so flippin' good.

All the food was great. The conversation with our new BFF's was great. Full and satisfied we hopped back on the boat and headed to the hotel under a clear starlit sky.

The next morning we biked to The Local, a great little cafe right near the hotel in "downtown" Irvington for breakfast. That was followed up by a deep tissue massage (I know, I hate weekend me too a little). As usual I was told that my back is so tight and full of knots that it is almost defies all laws of logic and physics. 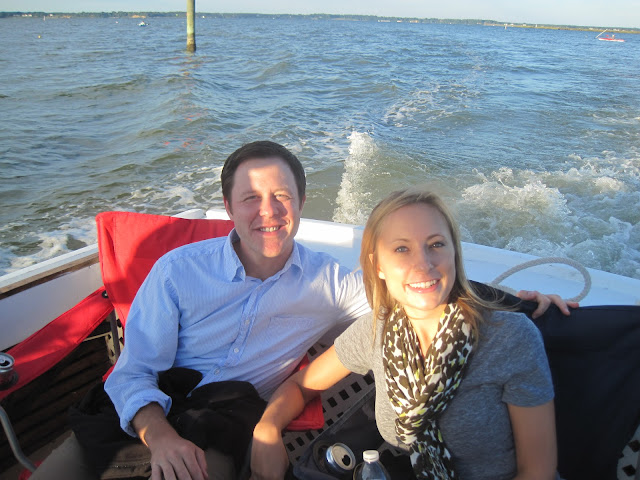 Thank you for writing about The Tides Inn. Your post was informative, exciting, and inspiring in our search for a low-key honeymoon destination. If you don't mind, I linked to your post in my blog post about our time at The Tides Inn. Check it out: http://makingmindfulness.blogspot.com/2014/05/our-low-key-honeymoon.html Thanks, again!