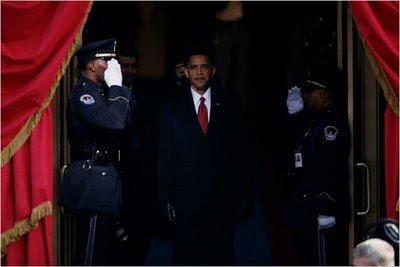 I know I should write something deep and historic and meaningful right now, because it was a deep, historic and meaningful day today. But I worked for eight hours and I'm far too exhausted to come up with anything eloquent enough to do justice to such a day. So maybe I'll be able to pool my thoughts this weekend when I'm well rested. For now I just needed to write something, to mark the occasion, no matter how inadequately.

Today was a good day. Today the world changed. Today I saw the candidate I believed in become president, the candidate who inspired me to spend two cold, rainy days in Durham knocking on strangers' doors, the candidate who I waited in line to see speak at the Cistern in Charleston way back in January. Today I was proud to be American, proud of that giant mass of people waving flags on the Mall. Today I feel excited about what's to come. I can' t know this, no one can, but I can hope that the next four years will make us better and stronger and bring us back to where we belong, in an America that lives up to its promises, an America that leads the world not by force or intimidation but by its ideals and values. Today I saw an African American man become the president of the United States. Today I saw people on the news who had lived in a black and white America, people who had known segregation and open racism and hate, stand there and watch an African American man become president. I saw their tears and I saw their joy.

We stampede Wal Mart workers to get to flat screen televisions and we eat too much and we watch too much TV and we can be terrible and awful and greedy. But today, we were Americans united in the possibility of our new leader, united in the collective possibility of ourselves. And that's rare and that's beautiful and that's something to celebrate, no matter your party or political creed.

Today was a good day. Today Barack Hussein Obama became the 44th President of our United States of America. 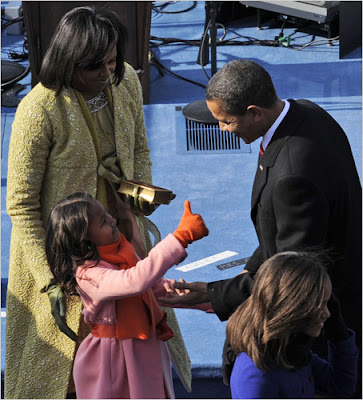