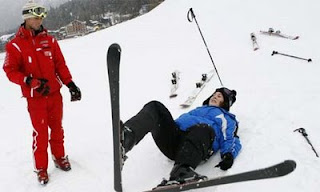 To ring in 2009, I went up to Wintergreen for a couple of days to ski, roast marshmallows, drink hot chocolate, all of that ski lodgy stuff. I've gone skiing maybe five times, but it had been five years since my last trip. And you know what they say about riding a bike. Well it does not apply to skiing. The above image is not technically me, but I think it paints a pretty accurate picture. Never have I felt more like an awkward toddler since well, I was an awkward toddler.

I reached the conclusion that skiing is one of those sports that gets harder as you get older. Five years ago, I was seventeen and clearly less afraid of injuring myself or my dignity. Little kids just zoom on down the hill, no poles, no hesitation, no fear. Which of course is slightly humiliating. Here I am, a fully grown adult, going at a snail's pace down the bunny slope, a look of terror on my face, both arms flailing for balance and five year olds are leaving me in their dust.

But despite my general ineptitude, by the end of the night, I remembered that I do like skiing, that despite the clumsy and heavy equipment and below freezing temperature, despite the snow blowers pelting me with hundreds of drops of ice, despite losing all sensation in my face and toes, despite nearly falling over every time I got off a lift, skiing really is fun.

Now the total body soreness that comes the next day on the other hand....
Posted by Unknown at 3:00 PM

Oh, that isn't you in the picture? I'm kind of confused then. We're all proud of you for sticking with it and you're more than welcome to come back any time :)

And don't worry - the little kids were leaving me in their dust on the intermediate slops I tried too.