Okay so I may not have shot a Yankee, but I experienced an incident that I can only refer to the closest I may ever (hopefully) get to a Scarlett O'Hara moment.

To give a little background information, I live in a crack house.

Okay that may be a slight exaggeration, but sometimes it feels that way. When I decided to sign the lease on this apartment last fall, it all seemed like sunshine and daises. I didn't pay much attention to the state of the interior of my building, because I loved my apartment and I loved the location. It was on Monument Avenue, the street in Richmond I've always dreamed of living on, and in a historic, handsome nearly 100 year old building. The property management people seemed nice and had a legitimate office, and they had multiple buildings throughout the city.

Then I moved in and I realized I may not have been very thorough on my search (I was blinded by the wood floors and the giant windows!). First of all, the building allows smoking indoors, something I never even considered asking about because until now I've only lived in beautiful Charleston houses (divided into duplexes). As most modern buildings do not allow this (because it ruins them, forever making them smell like stale cigarettes), I think every smoker in Richmond decided to move in here. And they smoke, constantly. And each time they smoke, each cigarette (or other) they light, my apartment immediately fills up with that intoxicating scent of cancer.

I hate it. I've bought so many candles, you have no idea. But nothing covers up that smell. Also I realized that no one has done maintenance on this building in perhaps 50 years. The paint is peeling everywhere, especially the exterior windows and doors. The carpets in the hallways are mangy and disgusting. The paint on the walls is seven different shades of ugly and also peeling. A railing is broken that leads up the marble entrance stairs (and my God, as the daughter of a lawyer, sister of a lawyer, cousin of a lawyer, and sister-in-law of a lawyer-my family=lots of lawyers, all I can think when I see that is a giant, red, flashing LAWSUIT).

We have five super cans for a building with over 40 units. You do the math. This means that by every Friday (trash comes on Monday) there is garbage all over the sidewalk-pizza and beer boxes, random pieces of furniture, food strewn about. I am positive that there are multiple families of rats living there and living the life.

There are always cigarette stubs in the hallways and on the sidewalk in front of the building. My neighbors leave random crap in the halls-including a huge television that has been outside my door for almost a month.

And the neighbors, oh the neighbors. Some of them may be very nice and normal. Those are probably the ones I don't see often, because they work and live quiet, dignified lives. But my downstairs neighbors are just the worst. They don't appear to work or go to school or do anything at all with their lives other than play the most stereotypical getting high musical imaginable at volumes so loud that it shakes my own apartment and the inside of my brain. They often get into shouting matches, and many times it sounds like a one person shouting match-just a shrieked chorus of curse words that would make sailors blush. I've heard weeping and crashing and singing and every other loud, obnoxious sound imaginable. They've broken their windows, shattering glass onto the sidewalk below.

It hurts my heart that this building has been neglected and abused by both its owners and its occupants. I've long admired the building when I've driven or run past. It's this stately, solid structure, a piece of the street's architecture and character, and it should have been taken care of. It's earned it by being around for all of these decades. I think of the tenants who lived here in the 20s or 40s or 60s, of all the people it's seen come through its doors.

And I don't understand why my slumlords  landlords have let it decay. Or actually I do understand. Their business model is to put zero money into the property (or as scant as possible) and collect (the admittedly cheap) rent. I just don't like it. I think this business model attracts sketchy tenants, as my mother wisely pointed out to me (four months after I moved in), people who don't care about their surroundings, who don't care if their buildings fall down around them, as long as they can get high and drink and listen to loud music.

I do care about my surroundings. I just was high on wood floors and dishwashers and a big living room and $615 a month rent (with gas and water and trash!), and didn't see it at the time.

Which brings me to the events of last week.

I came home from babysitting around 10:30, strolled up to my buildings entrance doors (two very large, very heavy, glass doors) and paused.

One of the doors had its glass smashed to bits and looked like this. 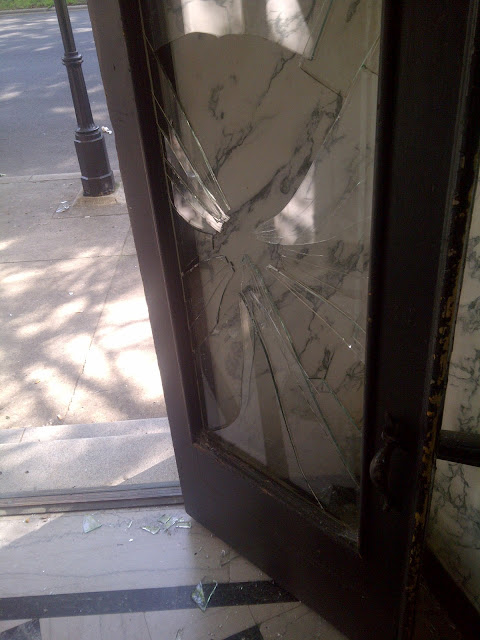 I stopped for a moment, as one does. I was a bit perplexed as to how the door got in this state, but it was late and I didn't have the brain power to ponder it for too long. I walked up to my apartment, and not even 5 seconds after I closed and locked my door I heard the distinctive sound of more glass breaking. I looked out my window and saw a worker's truck parked outside with a ladder on top. Huh, I thought. Maybe my building actually sent someone promptly to fix the door. The maintenance guy is probably just busting out the remaining shards of glass.

But then I saw a younger man step to the driver's door, get in, and peel away.

That son of a you know what had just smashed the other door.

This is when Scarlett took over. I didn't think. I didn't process. I just flung open my door and ran down the stairs, dialing 911 as I went. This is what I found. 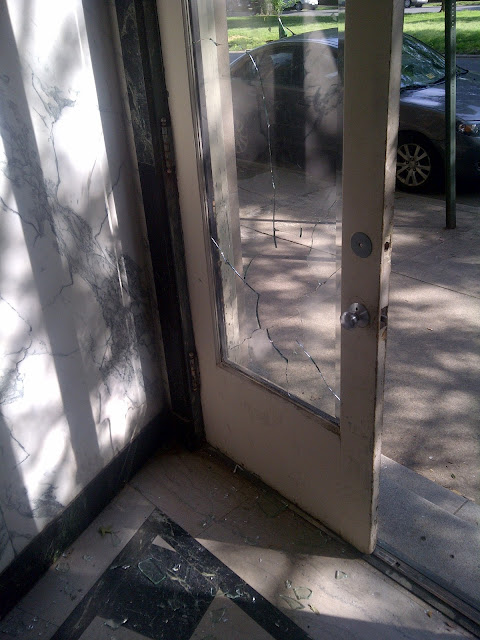 I didn't care that it was 11pm and I was alone. I didn't care that whoever did it might come back. My building was just attacked, and I took it personally. I was pissed. I had to stop myself from chasing after the guy on foot.

Now this may not sound dramatic, but honestly until that moment I would have assumed my choice of action would have been to hide in my apartment. But as soon as I realized what had happened, all I wanted to do was make sure it stopped, make sure whoever did it was caught. I gave all the information to the nice 911 dispatcher as calmly as I could (probably not calmly). Some of my neighbors came out (all boys, all who trickled out of their doors after I did).

I have no idea if the police got involved. They never showed up. The building fixed the doors in a couple of days (even they could not ignore the flashing red LAWSUIT presented by massive, ready to stab someone, shards of glass hanging in the breeze).

And I'm still pissed. Apparently the guy was yelling "Nicole" as he did this. I've listened to countless screaming fights outside my window between a guy and a girl, and methinks the two could be related. I'm alternately angry at this "Nicole" and scared for her if this guy is her boyfriend/ex-boyfriend/stalker.

Mostly I'm disapointed, that my poor building, already in such rough shape, was further beat up, and that because of the type of people in this building, no one is all that shocked or outraged.

I'm secretly a little pleased that my response to this situation was not to cower but to charge and defend (may not be the wisest course of action, strictly speaking). But I should have known. By virtue of my Southern heritage, that reaction is firmly in my blood. I put down roots the second my feet touch the ground, and I did that here, even in the short five months since I moved in. I love places and homes and land to an absurd, probably unhealthy extent, to the extent that I hurt when my place hurts, that I feel where I live is an extension of myself and respond to an attack on where I live as an attack on myself.

I love my apartment and this building and think it could be great again, if shown just a little care and attention, but I think my days in it may be numbered when my lease runs out. Because I simply can't live in a place where people (both owners and tenants) don't respect where they live.

Maybe that makes me uptight and high maintenance. But mostly I think it makes me Southern and sentimental and yes, very stubborn.

And in that way Scarlett and I have a lot in common, minus the gun violence.
Posted by Unknown at 11:59 AM

You go, Liz! I think I saw some of that unfolding over your Twitter feed. Kind of amazing that you were the one that responded while all the boys in the building hung tight. Not sure which is dead -- chivalry or bravery. Maybe both?

Thanks! I think it may be both, or at least just in my building :)