Holy crap y'all. My day today was so productive it blows all other days out of the water. It could take all the other days in a week and bench press them. And then eat them. On a sandwich.

It started at 7:30am (which for me is EARLY on a Sunday). It included the following:

-Ate an awesome lunch of oatmeal made on the stove (with a banana whipped in while cooking), topped with a spoon-full of peanut butter and two dark chocolate chips which melted perfectly in the hot oatmeal. Sounds decadent but this actually came in under 350 calories (as you can see it's really not a giant portion). But it kept me full and happy until dinner at 7. 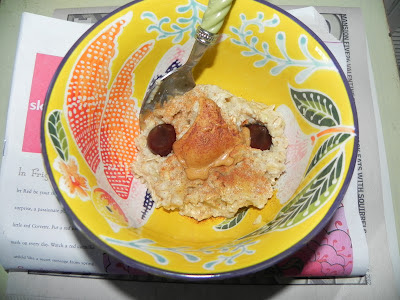 -Cleaned out my refrigerator, sopped up the massive leak under my sink (which I now know happens every time I turn on the garbage disposal)

-Dusted, vacuumed and swiffered my apartment until it was spotless

-Did yoga for the first time in ages and foam rolled for the first time in ages. And man did my body need that foam roller. The first time I ever did it in my physical therapist's office, it felt like I was rolling over massive bruises. As my PT told me it hurt so badly because of the built up scar tissue and adhesions between my muscle and fascia. The more I rolled, the less it hurt. After a while it became a good barometer for how my muscles were doing, because certain spots would hurt every once in a while, after a long run or if I was feeling particularly tight. Anyway, I digress. Today it felt like one big bruise. Sorry muscles. I promise to take better care of you.

-Made these little oatmeal balls off of my new favorite blog, Kath Eats Real Food. It's written by an RD who actually lives in Cville, and I'm obsessed. I always am more inspired to cook things when I read about them on people's personal blogs rather than simply in a health magazine. When there's a story behind it, plus awesome photographs, it's just more fun you know? I'll copy and paste the recipe straight from the blog. It is as follows.

Ingredients (21 balls)
DryWet
Instructions
So I made them pretty much exactly like above, only without the chia seeds (couldn't find them) and with EnviroKidz Organic Koala Crisp Cereal (because I couldn't find plain brown rice cereal, I'm sure they have it at Whole Foods because half of whole foods consists entirely of brown rice products, but it's too far away). But the cereal is low calorie and is chocolate flavored. So I think it's a win win situation.
The sticky balls (tehe), turned out like so: 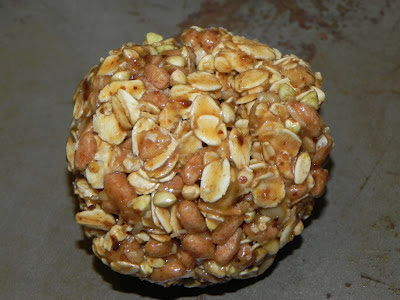 Delicious and almost disgustingly healthy. In fact they should not taste this good they are so healthy. But I'm super excited to be able to take them to school with me to have as healthy snacks. I never pack enough snacks with me, and then I get hungry and my only options are whatever is in the vending machine. So this is much better and better for me. I individually wrapped them and put them in the freezer and they're so darn cute all snuggled up together I had to take another picture. 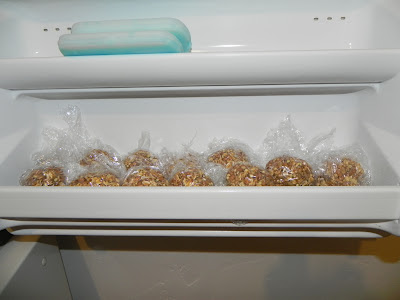 -I was going to make kale chips but I ran out of time so that will have to happen tomorrow. I also made a healthy dinner (also inspired by Kath Eats Real Food) of eggplant pizzas. I chopped an eggplant into discs, drizzled them with EVOO, salt, and pepper and baked them at 400 for 20 minutes. Then I flipped them over, covered them with Trader Joe's pizza sauce, feta and shredded, light mozzarella cheese (real mozzarella would be better, but it doesn't keep well and I always end up throwing half of it out, which makes me sad, because good cheese does not deserve to go in a trash can). I sliced up some roma tomatoes and put those on as well, then put them back in the oven and baked for another 10 minutes until everything was all gooey and melty. As a finishing touch I added a sprig of fresh basil to each "pizza."And that turned out like so: 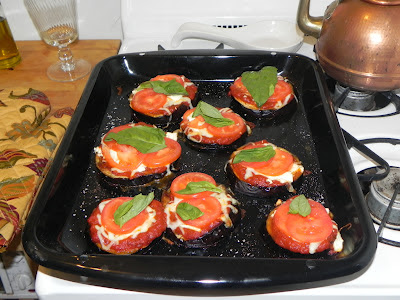 So let's face it. Eggplant pizzas are never going to be the same as gooey, greasy pizza pizza. But they're delicious in their own right (I like to think of them more as mini eggplant parmesans without as much cheese), and the healthiest pizza you can eat (especially if you go light on the cheese, which I did).
So that was my Sunday, 7:30am-10pm. I have desperately needed a catch-up day like this, and my sanity needed a day like this (I tend to reach unhealthy levels of stress when things pile up). So now I'm going to watch the end of the Oscars and do a little light Pathopharmacology studying, maybe with a mug of hot cocoa to satisfy my sweet tooth (I also had gotten into the bad habit of giant bowls of cereal after dinner-which are delicious, but I'm trying to keep post dinner snacks below 150 calories). And then I'm going to sleep. Very well.
Posted by Unknown at 10:13 PM