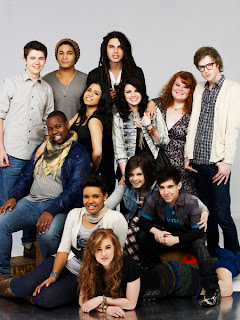 Until a couple of days ago I thought that the only people who should watch the Glee Project were teenage girls with posters of Justin Bieber or Jonas brothers on their walls. But then on Sunday night there was nothing else on. Shark Week was over. And if I wasn't going to watch hours of disturbingly graphic shark attack reenactments, then what else was I going to do?
So I gave The Glee Project a chance in that half-ironic, half-cultural experiment way we always first watch something that we would be embarrassed over if anyone else knew we were watching (hello Jersey Shore and all of the Real Housewife franchise). And oh it's so good. It's good in that way that Glee was first good-when you watched it and they broke into a musical number and at first you were embarrassed over the whole thing but then within seconds just gave up completely on that embarrassment because it was too darn delightful and cheese-tastic. But it's like goat cheese cheesy, in that there's actual substance there. It's not Breaking Bad, but it's refreshing in this reality competition cluttered landscape that in this particular reality show there is a whole lot at stake. These kids (and they are such kids, so heartbreakingly young and earnest, even in their ambition) are on this show to get a 7 episode arc on Glee. Before I watched it, I assumed they would just win like a one-line walk on role, like the contestants on America's Next Top Model win on CW TV shows (don't pretend you don't know what I'm talking about, and if you really don't know what I'm talking about, well then, you are clearly a better, more dignified person than I).
But 7 episodes on this massively successful show, when most of them have never acted before in their lives. That's a big freaking deal. And so even though I went into it all haughty and judgmental it took about 5 seconds to just be completely won over. Yes, it's all a little silly with the "homework" assignments and music videos, but the core of the show is pure. And that's rare for a reality show. Most reality shows are in fact quite rotten at their core. They're full of withered, shrunken, fame hungry souls that have no hope of redemption, that exist purely in the land of reality TV and would apparently dissolve into puddles of sunless tanner and designer labels if removed from a camera.
But these kids on the Glee Project, well at least for the moment, they're just sweet, sweet kids, all hope and dreams and awkwardness, and ridiculously endearing. Maybe it's because I know now, at the grand old age of 25 (insert sarcasm here), how much changes between 18 and 25, how much harder it gets to hold onto those dreams you had at 18, how the world does everything in its power to pry those dreams right out of your hands. Maybe that's why the sight of these 18 year olds singing and dancing and truly, non-ironically believing in their dreams honestly is very moving to me, in a way I never expected the flipping Glee Project to be.
Oh and Damian. Sweet, sweet Damian. He's Irish and has these big blue eyes, and he's so adorable I literally want to shrink him, put him in my pocket, and carry him around with me. And I know that makes me creepy and a borderline pedophile, but if you watch this show you will know what I mean.
I urge you to watch it. It's the least classy, least refined, least sophisticated, least cool TV you will watch all summer. It's simply itself, all earnest, goofy, embarrassing heart.
Posted by Unknown at 8:11 PM