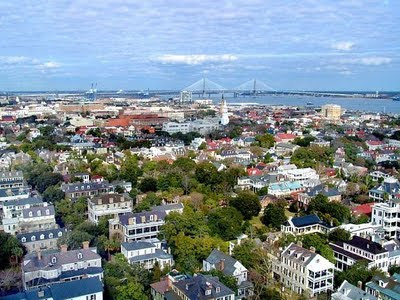 I spent the last few days in Charleston. I went to Sullivan's Island, sat on a chair with my toes squished into the sand while the warm ocean air blew in lazy drifts across my face. I ate a big, juicy burger at Poe's-the best way to eat a Poe's burger, pink in the face from sun, major beach hair, with my legs and arms still covered in sand and salt. I ate a fluffy, soft egg and cheese biscuit at Hominy Grill and then wandered aimlessly around downtown South of Broad, not even minding the swarms of tourists, content and happy to share so much beauty. I repeated my beach excursion only at Isle of Palms, and watched little back dolphins skim the waves as I sipped from a cold Corona.
And then I left. And as it does every time, my heart broke, snapped in two like it was made of twigs instead of muscle.
Although maybe that's the wrong way to phrase it. You see, I don't think my heart breaks when I leave Charleston. I simply think I leave it behind. I watch it recede in the rearview window along with the white triangles of the Cooper Bridge.  Because Charleston is my soul, and it's my grace. And judging by the way it feels every time I leave, Charleston is my heart.
I sometimes think about what would have happend if I hadn't gone to school there, if I had gotten into UVA or had decided to go to Elon or Mary Washington instead. No offense to anyone who went to those schools, as they are great schools and for many people they would have been right. But for me there was only every one choice, one school, one town.
I don't care what oppurtunities UVA would have given me. I don't care if you told me that if I had gotten into UVA, I would be making six figures right now (because so many 25 year olds are in this economy). I wouldn't change a single thing about my life if it meant giving up Charleston, if it meant that Charleston would just be a pretty place I viisted once. The thought of that shakes everything inside of me. It leaves me clammy. Because without Charleston I wouldn't have an anchor in my life.
When I'm in Charleston everything makes a little bit more sense. Life can still be stressful and overwhelming, but whenever life was that way when I lived there all I would ever have to do was walk out my front door. I can't even count the number of walks I took Freshman year, when I was homesick and scared and nervous about being on my own. And it didn't matter how upset I was when I left my dorm, as soon as the city got a hold of me, as soon as I was enveloped in all that heart-bursting beauty, my heart would slow, my breath would deepen, and I'd know, not just trust or believe or hope, but really, really know, that it was all okay.
I don't know if everyone gets that. I think I might be really, really lucky. And I know it's not just Charleston, that other people could have their Charleston's in Maine or Iowa or California, a place of beauty and contentment, a soul mate of a city. But I'm not sure everyone has that. And I know how close I was to not having it, to signing a letter of acceptance to somewhere else and never having Charleston in my life.
Thank God that didn't happen. Thank God this life of mine has Charleston. I hope I will live there again one day. Honestly it's hard to even wrap my head around a reality where I never live there again, because as much as I love to visit, it's always a little excruciating. Because what I really miss is the life I led there. I miss grocery shopping and going to the dentist and running errands on rainy days. I miss those thousand boring, inconsequential details that make a life. I want to have a life in Charleston again. I hope very much that I will.
But if I don't, if for some reason Charleston and me are through with that part of our story, then I'm still thankful. I'm thankful for the four and a half years I had there, four and a half years that gave me enough beauty to last a lifetime. I'm thankful for what I can see when I close my eyes, for all of those frozen snapshots, of marsh and balletic bridges, of still harbor and rushing ocean, of tangled oaks and whisps of Spanish moss, of grand old houses and tiny, weathered docks, of gentile columns and shady porches, of oysters on cold nights and buckets of shrimp in the summer, of sweat and humidity and salty rain, of shops and markets and water, water for miles, water gently holding a town and its people with each new tide.
Posted by Unknown at 8:35 PM