So I am sitting here at Starbucks right now, because I have been chased out of my house by fleas. 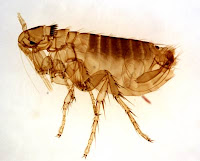 Times 5 gazillion. Well not really, but it might as well be. These lovely little creatures literally invaded our house. We had a cat staying with us (long story), and this cat did not go outside. Nope, apparently in Charleston animals don't even need to go into the great outdoors to pick up fleas. Fleas are so aggressive that they leap into your house when you're not watching and then proceed to have 10,000 babies who then have babies of their own, and it's just a never ending cycle of flea baby making. And so we thought we took care of our little flea problem by 1), getting rid of the cat (don't worry we didn't throw him into the marsh as we were sometimes tempted to do-he's just with a new mommy) 2) buying up Wal-Mart's entire stock of anti flea sprays and powders and shampoos (for the cat, not us) and 3) washing everything. And we left for Thanksgiving thinking our townhouse would be just as flea free when we returned as it appeared to be when we left. But as I now know, Charleston fleas are a lot like their insect couterparts, Palmetto bugs. They simply refuse to die. Coat your entire house in chemicals that would kill a small horse, and somehow these miniscule little bugs find a way to keep kicking. My roomate, Laura, came home to a full scale flea war. Before we rarely actually saw the things, but the bites all over me told me they were there. But poor Laura returned to a house fully taken over by tons of very hungry fleas that had hatched when we were gone. Gross right?

So the first thing I did the next morning was call an exterminator, because I am able to recognize when something is completely out of my league. And the exterminator guy told me on the phone that no matter how loudly all of those store bought sprays and foggers proclaim, nothing kills flea eggs. They are surrounded by an impentrable cacoon that can not be broached by any man or chemical. I really wish I were kidding, but that's how freakish and straight out of science fiction fleas apparently are. Mark my words, if anything is going to bring on the apocalypse it would be a baby boom of fleas. So the only way really to get rid of fleas from your home is with repeat treatments, the first of which I could only schedule on Thursday at the earliest. So yes, for now I am homeless. I haven't been able to unload my car from my Thanksgiving trip to Richmond, so I am driving around like a crazy person who lives in their car. I have no internet at my dad's Summerville apartment where I've been staying, so I have been forced to seek shelter in the Wi-Fi world of Starbucks.

Other news in my life?

I bought a sparkly cardigan. If you don't know me that might not seem like that big of a deal, but I have been dreaming of owning a sparkly cardigan for some time now (I know, I dream big). And my new one is black and shiny and I love it.

I'm still in the midst of research to try and figure out how to go abroad (volunteering or teaching) without having to plop down a several thousand dollar program fee. If anyone has any ideas or the name of good programs or just a desire to give me 5,000 dollars I'd much appreciate it.

This isn't really news, but I thought I'd share the article and accompanying video from the New York Times magazine website, because it made me almost giggle out loud in a mostly silent Starbucks, and it put into words exactly my own thoughts after watching this segment of 60 minutes on Sunday.

Though we were disappointed with the brevity of Manderson's shirtless star turn (his second since the unfortunate spray-tanning incident of 2005), we did learn a couple of things. First, Anderson, like that dog/monster the Peruvians want to give to Barack Obama, is completely hairless from the ears down. Like, if you happened to rub your face on his chest, it would squeak. Unless it was oiled up, of course. Anyway! The second thing we learned is that Anderson has surprisingly delightful deltoids in addition to his bodacious biceps. Clearly he's overworking his arms in comparison to the rest of his body, but he's still paying attention to those less camera-friendly muscle zones. We want the number of T.J., his trainer! No, seriously, we have some questions. We promise not to call after 1 a.m.