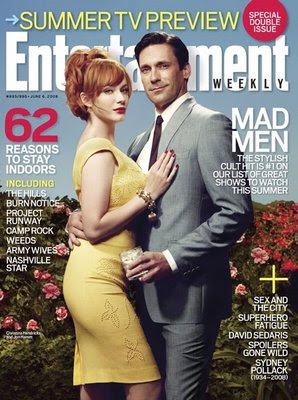 So as I was flipping through channels last night, I caught a few snippets of the Emmys. What struck me most from the whole telecast was when the cast of Mad Men went up to get their Emmy for Best Drama Series. I'm a big fan of the show, for its wonderful writing and acting, but also for its absolutely gorgeous period work; every single detail of this show just oozes with the atmosphere and tone of the early 60s. Now it was a little jarring to see the cast in their modern ensembles, gowns and suits and what not, when on the show everyone is constantly decked out in pitch perfect time period clothes. But even in their modern finery, this cast stood out apart from all of the other starlets and television actors in that building. Whoever cast this show did an absolutely fantastic job. Because last night, amidst a sea of mostly plastic and hungry looking actresses and over groomed actors, the men and women of Mad Men recalled a time when men looked like men and women looked like women.  I'll take John Hamm (aka Don Draper), that impossibly masculine hunk of man over a dozen spray tanned CW boys any day. And the lady who plays Joan, well she is just the epitome of what our society should find attractive in a woman-a glorious display of hips and curves and sheer feminine confidence. Sure Mad Men is a period piece, and the actors reflect the looks of that period, but wouldn't it be nice to still live in the world of Man Men (minus the crushing social repression and constant usage of alchohol and tobacco), or maybe to at least be able to visit that world (I think those cone shaped bras might get a little old after a few hours).
Posted by Unknown at 11:19 PM