So I promise I'll get back to my Indian adventure in due time (next up...me on a very pokey camel), but I must pause briefly to discuss a matter of inordinate importance to our society-and of course I refer to the season premieres of Gossip Girl and 90210. Sure I may technically be out of my teen years, but that doesn't stop me from having an unhealthy attachment to teen programming, so I relished the chance to see new episodes of Gossip Girl and to get a first look at the retooling of one of the great television shows of all time, Beverly Hills 90210 (for proof simply tune to Soap Net anytime between 5-7; it's all there: the spandex, Dylan, Donna Martin-the ultimate teenage angst soap opera in all of its 90s neon glory, or see below for a quick reminder.


But 90210 (the new edition) failed in my mind to even come close to its predecessor. Here's why.

1) The main character Annie is no Brenda Walsh. Sure, Annie's supposed to play the Brenda-ish part of a naive Midwesterner suddenly transplanted to scandalous Beverly Hills-but whereas Brenda was actually interesting on occasion (come on, love her or hate her, you've gotta admit Shannon Doherty was never bland), this Annie chick is as harmless (and as fascinating) as a guinea pig. And did you see the scene where she dances? I had to change the channel I was so embarrassed-for her, for me, for anyone whose minds were unwillingly implanted with the image of all that dorky, white girl stomping and flailing.

2) Ethan or whatever his name is no Luke Perry. I mean who could really top Dylan? But this kid doesn't even come close. Not only is he "eh" in the looks category, but he has zero charisma, zero charm, and pines away for that Annie girl when he's with the much hotter and much more interesting Naomi. I mean really?

3) All of these girls are way too skinny. Okay this may not really impact the show all that much, but watching last night I was struck by the fact that every lead girl in this show is not only actress thin, but dangerous, Nicole Richie kind of thin. I know realistically that no actress nowadays is going to wear higher than a size 2, but a show about teenagers that is targeting primarily teenage girls is (and yeah I'll say it) irresponsible to cast actresses whose combined weight is less than that of one plus sized model. And to be more realistic, even more impressionable preteens are going to watch this show. I was eight or nine when I caught my first episodes of the original series. But as thin as Kelly Taylor and Brenda Walsh were, they at least had semblances of healthy bodies. These girls look like it costs them effort to lift their stilletos off the ground.

5) There's nothing organic about this series-it's an over produced, over polished piece of fluff that forces characters together instead of trying to build authentic relationships or conflict. The original 90210 was by no means high art-but it's a classic piece of television because at least in its first few seasons it had (occasional) moments that were relatable and real.


Now Gossip Girl on the other hand is one of my favorite guilty pleasures. And you could critcize it with a lot of the same points I criticized 90210 with if only it weren't such an intentional and brilliant piece of satire. Gossip Girl is supposed to create a world that could only exist in a heightened reality. Whereas you watch 90210 and feel that the creators hope to convince their audience that their characters could exist, you know that the Gossip Girl writers are setting out to create a decadent, lavish and highly fictional world. It's not a show about what it's like to be a teenager on the Upper East Side. It's a show about what everyone thinks its like to be a teenager on the Upper East Side. From Chuck-a sixteen year old lothario clad in bright red trench coats and arglye socks to Jenny-a fifteen year old social climber who lies and steals her way into the upper echelon's of her school's hierarchy-the whole thing is just a highly entertaining and highly addictive old school soap opera. It honestly and boldy strays away from realism and morality without any apologies. And it shouldn't apologize, because anyone who watches Gossip Girl and thinks it reflects real life is probably not old enough to be watching television past 8pm in the first place. And to be completely superficial for a moment (but when discussing Gossip Girl it's only right to be so), Gossip Girl wins time 5,000 in terms of general cast gorgeousness (bonus points for the fact that the girls are skinny but Blake Lively has, gasp, hips). I mean have you seen that Vanity Fair picture? You know what, even if you haven't you should-so just take a peek. 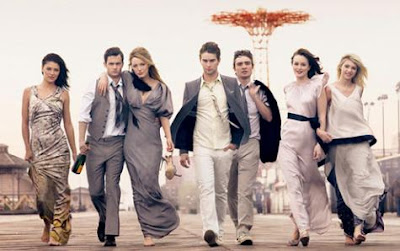 So there's my input in one of the most important debates of our time, Gossip Girl vs. 90210. I hope this has been educational.
Posted by Unknown at 6:31 PM