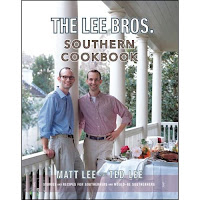 So this past weekend I made my first, honest-to-God, from scratch, Southern meal. I made it for some of my best Richmond friends to celebrate being home for Christmas, but at the same time some of my motives were selfish. I also cooked to bask in the beauty and detectability of Charleston cuisine, and by extension Charleston itself. I will be away for almost a month, but that's no reason I shouldn't enjoy fresh crab cakes and home-cooked buttermilk biscuits; one bite of each takes me straight to Hominy Grill breakfast or dinner at Fleet Landing. Now Richmond has its own wonderful cuisine, fully embedded in the south (for all of you people who may say that Richmond is in the north, don't even tempt me to list the various reasons why this city is definitively Dixie). But food from the deep south is different, especially food from the coastal deep south, and in the three and a half years I've been in Charleston I've grown to love it, everything from shrimp n' grits to boiled peanuts to fried green tomatoes. So it was both a challenge and a thrill to prepare a meal completely from my new favorite cookbook (the Lee Bros. Southern Cookbook). It was an even bigger challenge to make the entire meal without my mom in the next room to pester with questions about how to work the food processor or what exactly the difference is between flat leaf and regular parsley. So without further ado the line up:
1) cheese straws - This was made slightly difficult, because I couldn't figure out how to assemble my mom's food processor (damn you Cuisinart and your safety measures that make everything so complicated, who really cares about the occasional amputated finger). So despite having to make the dough in a blender (an interesting experience mandating the need to dig around in the bottom of the thing every few minutes with a fork while simultaneously crossing my fingers that the blender wouldn't explode from the sheer exertion it seemed to be putting out), they turned out great. I loved the unexpected spice the crushed red pepper gave the recipe, and the way the straws went from soft dough to slightly crispy crackers in only ten minutes.
2) Buttermilk Bird's Head biscuits. They're called bird's head biscuits because they're little as opposed to the massive "cat's head" biscuits you see a lot. Again these would have been a tad easier with a food processor but they turned out just fine without one. Although I am really an equal opportunity biscuit eater and will eat almost anything even resembling a biscuit. So I'm probably not the best to judge.
3) Mac n' Cheese. The Lee Bros. stick the Mac n' Cheese recipe in the vegetable section, and I love them for it. But like everything in their cookbook and like a lot of southern food in general, Mac n' Cheese only looks simple and unrefined. I think southern food doesn't get a lot of credit because food snobs look at things like grits or fried chicken and assume they known everything about it. They don't see any complexity or nuance. But really good southern cooking is full of complexity and nuance. There's just no showiness or arrogance. Southern cooks don't have to hide behind layers of fanciness or trendiness (all of those restaurants serving foam as food i'm looking at you). The best southern food uses innovation without for a second losing tradition. It's simple, but never ordinary. But I digress. As far as Mac n' Cheese the Lee Brothers recipe sticks with the oodles and oodles of cheese and elbow macaroni that makes Mac n' Cheese familiar, but incorporates extra sharp cheddar and high quality Swiss or Gruyere cheese as well as Bay Leaves to give it a kick. Mmm.
4) Creamed Corn. So I must confess I bought canned corn kernels. The recipe calls for fresh ears but apparently corn is seasonal. I really am not all that up on my seasonal vegetables. This recipe was as easy as pie, basically just combined a teensy bit of flour and butter to make a paste like substance, then pour in the corn and cream and simmer the whole mess until its done. Another comfort food that some may turn their noses up at, but just as tasty as any fancy side dish.
5) Crab Cakes. These were slightly intimidating because I had never made crab cakes before and they are one of my favorite foods so I was a little worried about screwing up. But they turned out great. I'm with the Lee brothers in their view that the best crab cakes let the crab shine through and don't cover it with deep frying or loads of breading. Basically they're just crab, mayo, a little bit of mustard, a tiny bit of bread crumbs, parsley and green onions. I sauted them in a pan until they were slightly brown and then baked them five minutes. Voila. Oh but the one catch is fresh crab is a must; no canned stuff. Although it is a pain in the ass to go through and get the shells out, my least favorite part about making meals with crab in it.

So I was supposed to make a red-velvet cake to top off the whole southern extravaganza but sadly one afternoon in the kitchen + 5 other dishes + one, two-handed me = does not a home cooked desert make. I'll save that one for later. But regardless everything turned out great. I love to cook period, but there's something about cooking what's familiar that makes me feel safe. When I'm in Charleston and missing Richmond and home I like to make my mom's chicken chili or tuna pasta salad. There's just this instant, visceral sense of comfort from making food I grew up with. I took it for granted for most of my childhood that my mother put a home cooked meal on the table almost every night. It is true that in a lot of ways a cooking legacy for women is the result of years of limited opportunities. But I don't think it's that simple. I think women took something that might have at one time been a burden or obligation and we made it our own. My mother learned to cook from her mother and I learned to cook from my own and there's something incredibly powerful and rewarding about that chain. It's kind of beautiful in a way, how something that might have one time been ugly and oppressing has turned into a heritage and a source of pride for a lot of women. I love the thought that years from now, when I have my own children, all it's going to take is making a pound cake or making tuna salad (the way my grandma does, with chopped pickles, chopped celery and plenty of lemon juice) to remind me of where I came from, and the strong, beautiful women in my family who came before me and lived through a time when they might not have had a choice about putting a meal on the table. It's the same way cooking lowcountry food or even simply southern food will always remind me of who I am. Yes, cooking is a way to eat. But I think anyone who truly loves to cook, who loves to find new recipes or rediscover old ones knows it more than that. It's a scribbled recipe, faithfully kept for years in a wooden recipe box by my mother, now typed up on clean white paper, kept just as faithfully, but with a whole new appreciation, by her daughter.
Posted by Unknown at 9:17 PM