-Disclosure. There was a time in my preteen existence when N'Sync was probably in the top 5 things I cared about. I had posters of them on my walls. I used to have in depth conversations with my best friend, MK, about the five of them, as if they were our close, personal pals (we always wondered about Lance, even back then; Joey was the funny one we'd love to have as a friend; Justin was dreamy; Chris we didn't talk about as much). I attended two N'Sync concerts consecutive years in DC at the Verizon Center with group of middle school girlfriends. Both times we screamed so loudly we all sounded like 30 year smokers the next day. We made posters and waved them madly as we danced in our seats (of course we had spent the entire previous MONTH memorizing choreography from watching music videos on MTV (how old does THAT make me sound?), which we just knew in our hearts would impress the band all the way from our nose bleed seats to the stage. To this day I can honestly say they were the funnest, most joyous, silliest concerts I have ever been to, or probably will ever go to.

Their break up, even though I was getting older and should have been past boy band related things, was...difficult. And though I've enjoyed watching JT's career grow and blossom, a piece of my TRL loving, Bye Bye Bye choreography memorizing heart has missed them dearly. I knew they were done, would never really reunite ala the less superior BSB (there was a legit rivalry amongst our 7th grade class between BSB girls and N'Sync girls, obvi the N'Syncers were correct).

Which is why last night's brief little snippet of a reunion still managed to bring me so much joy. There's only one window in your life to love a band as much as only a preteen girl can love a boy band. It's a love that is pure and without abandon, a love that has nothing to do with being cool or hip or ironic. It's just earnest, scream your head off, cry when they descend from the stage on giant strings in a cloud of pyrotechnics and dry ice love. 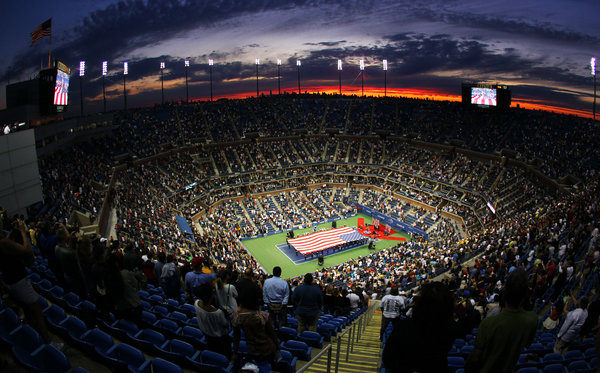 -The US Open started today and that brings me almost as much joy as N'Sync. I love this tournament.  I've explained at length on this blog that night matches at the Open are what solidified my deep and abiding love for tennis. There just is nothing like it when a night match creeps toward midnight and then past it, past the point when you should be asleep but you could care less, could not possibly think of turning the TV off, because you're in it, you're there in that moment, in that stadium in NYC just as much as all those people who are physically there, on the edge of your seat, living and dying with every bounce of the ball.

Plus, Nadal is healthy this year. Which makes me a very happy fan.

-I'm seeing the Beach Boys this Wednesday in Charlottesville, which I'm pretty stoked about. It's not so often you get to see living legends play a concert, and seeing them outdoors at the Cville downton mall is just the icing on the cake. Plus this concert is the first of three incredible ones I have scheduled for the next few weeks. The other two are Fun. (!) and Frightened Rabbit (!!). You may not have heard of Frightened Rabbit, because they're not that well known, but they are one of my favorite bands. Their songs are raw and gorgeous in the way it seems British bands just excel at, and I cannot wait to see them live.

-My first day of clinical immersion in a critical care unit was last week, and as much confidence as I gained this summer doing med/surg during my externship, I kind of felt like I started over there. Which is good. The best way to build confidence is to start off feeling completely overwhelmed (right? isn't that something people say?). My preceptor is a total super nurse, and I know I'll learn oodles from her. She's on the code team which means that every time someone in the hospital's heart stops, she drops  everything and runs there (which means I run behind her trying to keep up). I'm sure that will become somewhat more natural with time, because right now, when I hear a code called out, it feels a lot like this:

I haven't literally hidden in a closet yet, but I know it's only a matter of time :)
Posted by Unknown at 9:16 PM

Did you know that Frightened Rabbit is playing two shows in DC in October too? Just thought you should know!

Thanks Dave! I may have to see them twice in one month now :)