So apparently Baz Lurman (of Moulin Rouge fame) is directing a film version of what is arguably the greatest American novel of all time, and non-arguably one of my all time favorite books, The Great Gatsby. Now I loved Moulin Rouge. I even liked parts of Lurman's cheese fest, Australia. So maybe the guy could do a good job with this. It definitely wouldn't be a strict adaptation if his other films are any indication. It's possible there may even be singing. And I'm kind of okay with that because this book is perfect, like literally perfect in a way no book has a right to be, and so a strict and literal adaptation would not be the way to go because it could NEVER measure up. So why not get creative? Otherwise there's no reason to do a movie, because the book told this story so beautifully that a carbon copy of it would just be useless and sad.

And I even liked the first two casting ideas I heard, Tobey Maguire as Nick (he's sort of just the right amount of cute/earnest/smart/naive/boyish that I envision Nick as starting the story with). And Leonardo DiCaprio may not be the Gatsby of my imagination, but I think as an actor he could play Steve on Blue's Clues and it would be beautiful (now that I would watch). But then I heard some of the choices for Daisy, one of the most enduring characters of American literature, a character I in equal parts hate and love, an archetype. And well they're all just terrible. Blake Lively!? Serena Van DerWoodsen wishes she could be Daisy Buchanan. Scarlett Johanson? Ughhh doesn't even do that justice. Daisy is this perfect and beautiful on the outside dream of a woman who is crumbling and sad and horrible on closer inspection, and there's so much complexity and nuance to that and Scarlett freaking Johanson?

And then I heard Carey Mulligan. And I wanted to love this idea, because I do love her. But picture her and Leonardo Dicaprio in a love affair, just for a moment, and try not to be weirded out: 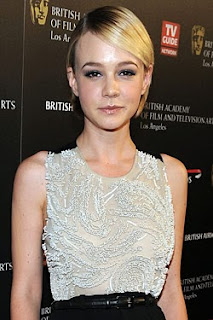 She's just not Daisy, not even close. Plus why do British actresses always get to steal our iconic American literature heroines. First Vivien Leigh takes Scarlett and Blanche Dubois and now this? Carey Mulligan has a buttoned up kind of intelligence that is in no way Daisy.
And I have absolutely no idea who could be Daisy. Funny how the character in this book I like the least is the one I really cannot imagine anyone doing justice too.
Posted by Unknown at 1:09 PM