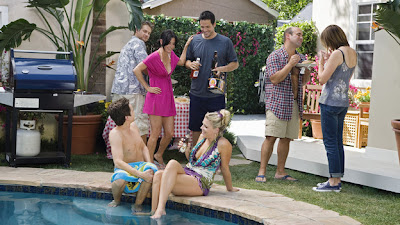 So I avoided the show, Cougar Town all last year, even though it came on immediately after one of my favorites, Modern Family. I heard that name and thought "blech." I think the whole cougar thing is one of the most over-used and obnoxious terms in our modern vernacular. But for whatever reason I gave it a chance when the new season started, and it is now one of my favorite shows. You have to ignore the name, because it's not at all about cougars or bobcats or cheetahs or any other feline species. It's about a family of friends, and it's warm and quirky and really, really funny, much like the other show that came from one of its creators-Scrubs. It has that same offbeat but fuzzy kind of humor, a show that doesn't trade in cynicism or darkness, but rather loving relationships and kindness. Plus I am obsessed with everything that Courtney Cox's characters wears, most of all her jewelry which yes I looked up, and yes it is from jewelry designer, Jennifer Mayer (Tobey Maguire's wife-this is why I do well at Trivia), and yes I will never be able to afford it as long as I live.

But the other thing I love about this show is that like Scrubs, it has become my go to source for hearing new music. At least once an episode there is a song that I must immediately own and listen to repeatedly, usually from artists I've never heard of, and might not have heard of if not for the show. Here's a sampling of some of the new, awesome music I've gotten from Cougar Town.


Leona Naess: Leave Your Boyfriends Behind


Noah and the Whale: Give a Little Love (this song is just so freaking good, one of the repeat 5 times in a row in my car kind of songs)


Nuno Bettencourt: Pursuit of Happiness (this is actually a clip of this song in the show, and any show that ends with grown adults chasing after a balloon has got to be amazing)