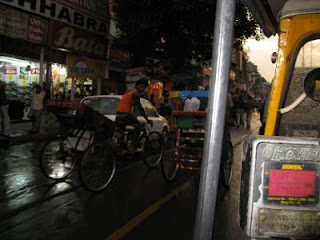 I remember my first day in India as a sleep deprived blur of auto-rickshaws, dogs, and heat, topped off with some Kingfisher beer. But more than all of that, my first day in Delhi was a day of lessons. Let's just say, a tourist in Delhi, particularly any relatively Western looking tourist, is going to start their first day naively and end that first day with definite traces of weary cynicism and hard earned pragmatism. I don't think it's too far off from what anyone experiences on their first day in a big, new city. Even in our own country, it's easy to set off to NYC or DC with Frank Capra dreams or romantic ideals and then end the day with stolen belongings and a suspicion of anyone selling anything, anywhere. But the life lessons in Delhi seemed to come hard and fast. Never before have I transitioned so quickly from wide eyed tourist to a seasoned traveler who scoffs at an overpriced auto-rickshaw fare. So what did we learn that first day in Delhi?

Delhi is not the friendliest city in the world. When you first get to Delhi, you walk out of your hotel and a half hour later it's hard to shake the feeling that for all of its mess and chaos, Delhi just might be the friendliest place on earth. Why the second you move your feet in any one direction there are a dozen helpful young men eager to show you to wherever you want to go. Need to find the way to a landmark that just happens to be a block away?-without even asking someone will find you and take you there. Looking for hotel or restaurant or shop recommendations? There's going to be about five different people determined to give you their picks. I remember feeling slightly absurd when we stepped out of our hotel in the wee hours of morning on that first Indian day. Because we had barely gone a few feet before several Indian men began competing over who could help us bewildered tourists find what we were looking for. Now over two weeks time I learned for a fact that there are many very helpful and friendly people in India, but what I learned within fifteen minutes of leaving the hotel in Delhi is that the friendly and helpful Indians are not the ones who track you down on the street and practically run along side you to keep up. No these are the Indians who receive commissions from a variety of souvenir stores, restaurants, travel agencies and hotels-Indians who know for a fact that the tourists they are "helping" have no idea where they are, where they're going or what in the hell is going on around them. I guess the best way of describing "helpfulness" in Delhi is like a giant Victoria's Secret (bear with me). You walk in and you kind of just want to browse, but every two minutes a very persistent sales associate descends upon you, and in the guise of "assistance" proceeds to harass you to the point where you're practically willing to buy the new 75 dollar bra or open ten credit cards if only you could be left in peace. In Delhi, as much as we wanted to be left in peace to browse, more often than not, these helpers decided for us that we were desperately in need of assistance.

The same craziness goes for getting auto-rickshaws, but at least the drivers don't try to pretend to be your pal. They're selling something definitive, they just have a very persistent way of selling. I'm used to the system in Charleston, where cabs have to be called on a phone a half hour in advance. In Delhi you walk anywhere near a road-hell walk anywhere-and every driver from a mile around will quickly descend upon you, shouting loudly at each other in an attempt to win the ultimate prize-clueless Americans who don't know how much anything costs. So there we were on that first day, happy go lucky and innocent. We took an auto rickshaw to the train station and happily paid four times the amount it should have cost, and the second we mentioned the word foreign booking office to our driver-we found ourselves speeding away from the station to a place across the street. We arrived at a solid block's worth storefronts, all of which displayed the words Government, Tourist, Booking, and Office-but in varying combinations and types of phrasing. I think we must have looked a little confused-but our driver pointed to a particular building then looked at us. "Foreign Booking Office," he said, in heavily accented English. Obligingly we got off the auto-rickshaw and went inside. Surely if the building said government on it, it must be in some way official. Fifteen minutes we walked out, ticket-less and fuming. The "government booking agency" turned out to be nothing more than a two bit travel agency, clearly one that pays auto rickshaw drivers on commission. So we set off to the real train station-where the real tickets were. We fought our way through the crowds and the shouting drivers and made it the front steps of the station this time. "Excuse me," comes another heavily accented voice from nearby. "Are you looking for the foreign booking office?" Why yes we are, we nodded, confident that this clean cut looking gentlemen with the fancy watch must work for the station in some capacity. We follow him like children up the stairs of the station (side note, as I mentioned last time, dogs are freaking everywhere in India, well this includes places like train stations-dogs on the stairs, dogs by the tracks, dogs in every corner and crevice) and down a hallway until we ended up at a darkened room. The Foreign Booking Office, obviously closed. "Come with me," the man says, "The office has another location." Now we didn't want to be asses and get fooled again, but the man seemed so professional, and why would he have taken us to the closed office if he wanted to trick us? Plus by this time a few other clean cut looking gentleman had joined our little band and they all seemed in agreement with him. Off we go, following blindly, out the doors of the station, through the busy parking lot, across the traffic clogged street, and towards, oh you've got to be kidding me, to another freaking travel agency. By this time we not only feel like complete asses but we've missed the train and have discovered a helpful passage in our guide book which states in no uncertain terms that the ONLY foreign tourist booking office in existence is inside of the train station on the second floor. Only it doesn't open until 8. Defeated, slightly humiliated, and more than a little ticked off (but a little wiser) we hailed an auto rickshaw (well I don't know if we ever exactly hailed an auto-rickshaw while in India-it's more like they hailed us) and sped back to the safety and peace of the hotel where our jet lagged selves napped for most of the day. Despite the frustration, our first morning in Delhi was incredibly valuable. We learned that whether or not we knew what we were doing, everyone around us assumed we had no clue, and that there was really no way to combat crowds of people from following us around, shouting contradictory suggestions and "helpful" tips or offers of assistance. We learned that the word government held very little weight in terms of determining if something was in any way official. We learned that an auto rickshaw from Connaught Place to the train station should cost no more than 50 rupees rather than the 200 rupees we paid originally. Basically we learned that all the old rules were out the window and that in India and in Delhi in particular we were dealing with an entirely different ballgame.

Other first impressions from that day in Delhi:

1) McDonalds is hoppin' in Delhi-like people out the door-almost all of them young, loud music, no place to sit, freaking the place to be if you're young and living in New Delhi.

2) Auto-rickshaws can seat three full grown people but it is a tight squeeze.

3) Tips can be expected for literally walking someone across a street or down a city block, even if that someone was already heading in that direction.

5) While riding through certain parts of Delhi on a rickshaw you can pass an internet cafe and an ATM one second and then a cow and a temple the next.

It would be nice to delve deeper into Delhi, but on that first day all I really had were impressions-because everything came so fast and so intense and so strange. Delhi seems to be a necessary stop in India, and I wouldn't trade my experiences there, but the first couple of days in India were less about enjoyment and more about processing and acclimatizing and gradually getting used to the sights and the smells and the sounds of a very complex and different kind of society. Delhi was over stimulation and a barrage of color and light and noise and sprawl. But after some life lessons and some sleep-I was ready to leave Delhi, as well as any leftover cultural hangups, and head west-towards the desert, towards the India I had dreamed about.
Posted by Unknown at 11:23 PM