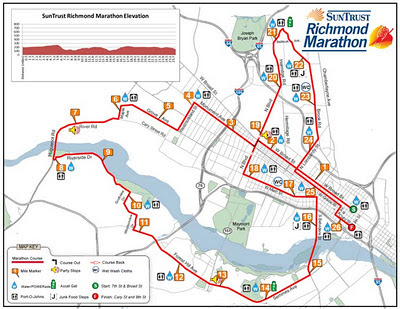 1. Holy crap you guys I registered for the 2012 Richmond MARATHON. Excuse me while I go throw up.  But really this is a very tentative registration. I mainly did it because starting at midnight tonight the fee jumps $15, and I am nothing if not tempted by a bargain. But I am not 100% committed yet. If the summer rolls around and I don't feel ready I will probably just do the 1/2 again. But I'd like to aim for the full shebang. Because the truth is I'm 26. Once the 2012 marathon runs around I will be 27 (I know, I might as well order my casket and pick out a burial plot now).
And one of my more recent life goals is to run a full marathon. And really why wait? Running 26.2 miles is an INSANE thing to do to your body. Like bat shit, nut balls, bonkers insane. But it gets even more insane the older you get. And yes, I realize many people in their 30s and 40s and 50s and even 60s and 70s run marathons and run them faster than my 26 year old butt ever could. That's awesome. But I am not one of those people. I am not going to be a limber 70 year old who competes in triathlons and eats raw eggs for breakfast. I am not even a particularly limber 26 year old. I have hip problems people. In my mid-20s. And one thing I've learned from my anatomy classes is that for women, when it comes to the health of our bones, it's really just all downhill from here, no matter how much cheese you (and by you I mean I) eat. So if I want to avoid permanently maiming myself in the pursuit of the insane goal that is running a marathon, my best bet is to do it while I'm (relatively) young.

Although let's not kid ourselves. I will probably still permanently maim myself. I had to see a sports medicine doctor from training for a 10k. Me running a marathon is like a water buffalo doing ballet. But maybe this is my one unlikely, scrappy underdog sports movie moment. Stay tuned.

2. I've already full switched my Richmond allegiance to Kroger (except for trips I make to Martin's solely to get Ukrop's bakery items or deli tuna), but here's an even better reason to shop Kroger, especially for the next two days. When I went in to pick up some groceries this evening, I was handed a little card from a nice lady at the front of the store with a list of urgently needed items for the Central Virginia Food Bank. The great thing was you could pick up items from the list and drop them off on your way out of the store, easy as pie. And I looked down at the list, and knew there was no way I was leaving that store without buying some items for it. The needed items were things I buy all the time- pasta, canned tuna, peanut butter, and never give a second thought to. And it's rightfully heartbreaking that for some people, right in our own city, those insignificant and inexpensive grocery store items, have all the weight in the world. Kroger is doing this until the 19th, and I just really urge anyone who reads this to make a trip to the grocery store. You don't have to load up your entire cart with the items (although I saw one woman in the canned vegetables aisle who was clearly doing this and I wanted to stop and give her a hug), but even if you just grab an extra box of pasta or a can of tuna to donate along with your normal groceries, those items mean so much. That's a meal. That's a night not having to worry about getting dinner on the table.

Most things get to me, but hunger and the lack of food especially hit a nerve.

When I was in Haiti we would try to hand out some of our food to the kids who always come to the construction sites, pieces of energy bars or bags of chips. These kids weren't dying of starvation but they had no fat on them and were clearly hungry. Food wasn't assured in their lives. I'll never forget how whenever I gave some food to one of the older kids, they would never eat it, not until they made sure their younger siblings had something first. I'd watch them as they handed granola bars and cups of water to their siblings, watch the eyes of these eleven and twelve year olds as they took care of others first.

These children, who had so little, who had almost nothing, wouldn't eat until their little brothers and sisters ate.

I should think about that more. Because in some ways it's easier, when you have everything, when you've never been hungry, to forget about those who are. Which all just brings me back to what Kroger is doing with their Feed Richmond campaign. It's really great. And I hope that everyone in this city does some grocery shopping this weekend, and throws an extra couple of things in the cart. Because it's a great and beautiful idea, making sure others have food before we ourselves eat.
Posted by Unknown at 10:09 PM