Ubud. Such a strange, little word, and such an imperfectly perfect little town. I spent my last four Balinese days and nights in Ubud. And if Bali hadn’t completely lodged itself in my soul before, then Ubud sealed the deal.
But first, to back up a little, Guspur (who else but Guspur?) picked us up in silly, pretty, spring-bread land Kuta. We were tan, well-fed, and probably a little buzzed from our morning, pool-side beer (don’t judge, you’d do it too if you were in Bali).
We loaded our stuff and ourselves once again into Guspur’s mini-van. The drive from Kuta to Ubud was a short one, but because we couldn’t resist one more Guspur road trip, we asked to stop at the sea temple, Tanah Lot.
Tanah Lot is one of thousands of Hindu temples in Bali, but it’s probably one of the most famous and most visited. We parked and walked through crowds of people and stands on a stone path to the temple. Snake charmers performed in front of tourists. Touts hawked souvenir key-chains. Large crowds of Japanese took elaborately staged pictures of one another. But then the crowds cleared and the path opened up and there it was, this impossible temple in the waves. 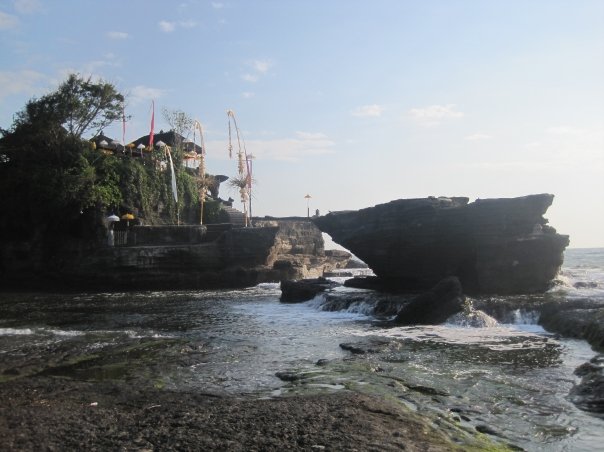 It suddenly didn’t matter that there was both an actual sea and a literal sea of tourists. It didn’t matter that random Asian people kept asking to take pictures with us (this happens more than you would think if you are Western and traveling in South East Asia). Nothing could really take away from the beauty of this man-made house of worship sitting improbably in the middle of nature’s own beauty trump card.
We didn’t go inside, but instead let Guspur lead us away down a dirt path. If this was an episode of “Locked Up Abroad” this would be when Guspur attempted to convince us to carry a pound of cocaine with us to Ubud. But no, Guspur simply knew a good, quiet place to get the best view of the temple. We found ourselves in the middle of a modern golf course, part of a resort hotel. And there on a little ledge near the 7th hole, we stood and could take in the sea temple in its entirety. The tide was coming in and the waves broke with bursts of foam against the rocky cliff at the base of temple. And miraculously no one got hit in the head by a golf ball. 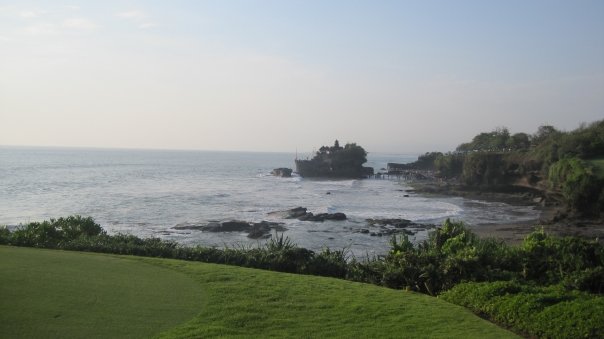 We began to walk back, and as we walked the sun started to set, framed perfectly in the sky above the temple. It was such a nice way to end our last Guspur "road-trip." By then it felt easy to walk and talk with him. This guy who I had initially been so mistrustful of turned out to be not just a wonderful guide but a good friend. We walked and stopped occasionally for pictures as the sun sank lower into the sky. 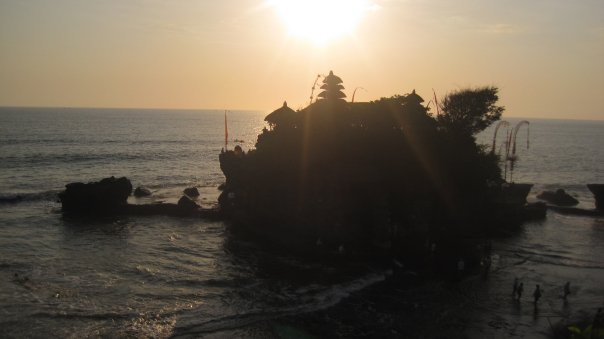 When we’d had our fill of the view and taken all the pictures we could fit on our memory cards, Guspur led us back up through the mini market place that led to the parking lot. Because Guspur was always plying us with food, he also purchased little Balinese snacks-rice flour cakes filled with sweet, syrupy liquid and handed them to us to try. As with everything strange in Bali, they were wonderful.
We got back in the van and made our way toward Ubud. Before we reached the guesthouse we stopped at the Monkey Forest. If you’ve read “Eat, Pray, Love”, then you’ll know that there are more than a few monkeys in Ubud. You’ll also know they can be terrifying.
My favorite part of the monkey forest might have had to be this sign. 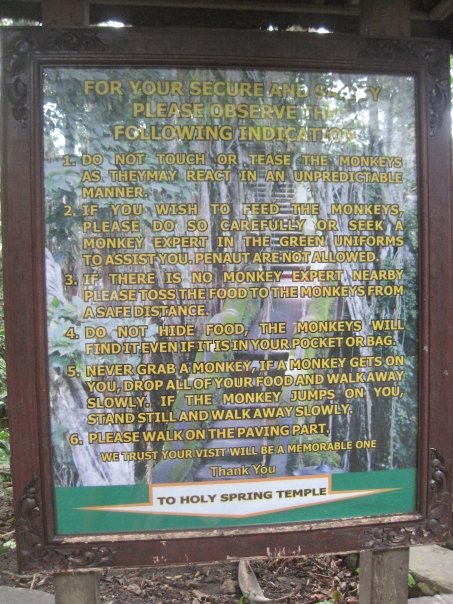 Is that not the scariest thing you’ve ever read? After reading that it was all I could do not to turn around and flee to the safety of Guspur’s minivan. Not only are we not supposed to touch or “tease” the monkeys (whatever that means, I mean do monkey’s not liked to be called names?), but we also have to make sure we don’t have food anywhere on are person or a monkey may find it. And if you’re thinking that this is like a zoo, where the monkeys are in nice, little enclosures you would be wrong.
These monkeys are everywhere! This is the wild people. Suddenly I found myself in the middle of that movie, “Congo”, which I don’t think many people saw but which I did and which scarred me forever about vicious, killer monkeys.  I looked up and saw monkeys in every tree, swinging from branches, scurrying up trunks. I looked around and saw monkeys on the ground, monkeys on ledges, benches. Some of these were of the tiny, adorable variety. There was even one scrappy one drinking directly from a soda can. 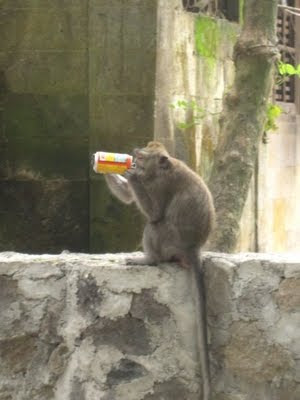 But other monkeys were not cute or scrappy. They were huge, with scary, angry eyes that would fix on you in a bizarre game of monkey chicken until you looked away. There were monkies who walked slowly and ponderously around, clearly daring any human to get in their way. There were fat, old monkeys who dozed on the ground, but there were so many of them I was sure I would step on one. 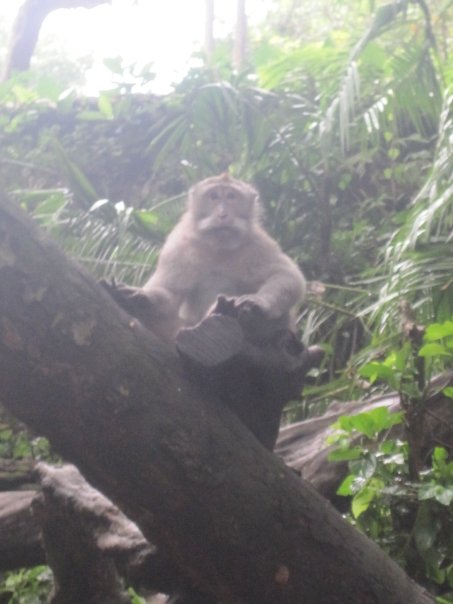 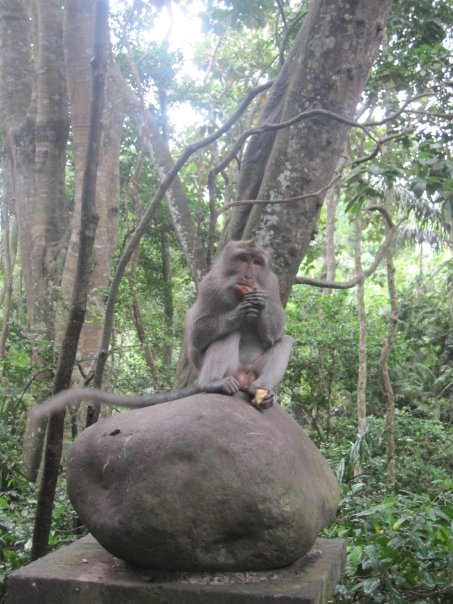 I kept nervously glancing up at the sky, waiting for a monkey to drop on me and start eating my hair or doing whatever it is mentally unbalanced monkeys do. When I wasn’t delving into monkey paranoia and could actually focus on other things, I could see that the monkey forest is an undeniably beautiful place. Everything is dark and green and covered with moss and vines. It felt ancient and old. Massive banyan trees with these crazy tangled branches blocked out most of the sunlight. Statues of dragons and monkeys were everywhere, and sometimes actual monkeys sat on the statues of monkeys and it was all very earthy and primal. 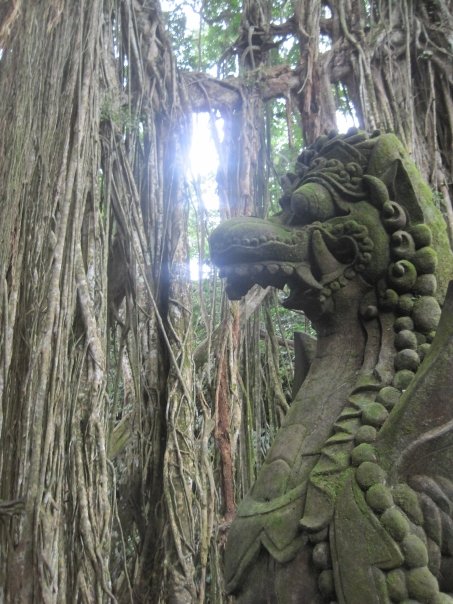 Our only close call was that at one point a monkey walked up to my friend, Caitlyn, and began to hiss at her.  She had been talking a picture of him and apparently this monkey was over the whole humans taking pictures thing. It even snapped at her leg, but luckily didn’t bite her, so sadly I have no exciting, rabies scare stories to share.
We made it out of the monkey forest alive and finally arrived at our guesthouse. For the first time in our entire visit we smartly listened to Guspur and stayed at a place where he knew the owners. This was not a hotel with AC and cable. There was no pool or fancy swim-up bar.
But it was one of my favorite guesthouses from my whole time in Asia. It was just so lovely. Balinese guesthouses are often arranged in compounds. There’s a main house where the family lives and cooks, and then clustered around are little houses where the guests stay. This was a fairly small guesthouse, with maybe 6-10 little houses for guests. Our little room was perfect. It was the bottom floor of a two-floor house. It had one main room for sleeping with two beds and huge floor-to-ceiling windows/doors, one of which opened right out onto a little koi pond. 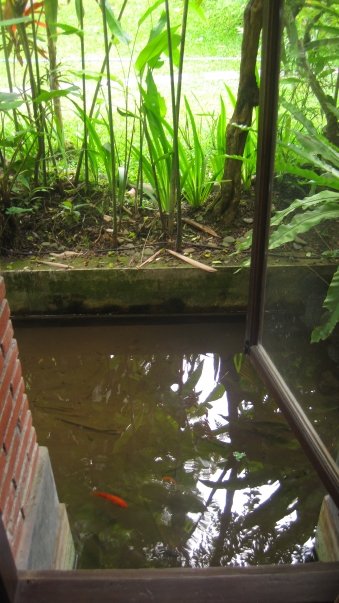 There was a little porch on back that opened up onto paradise. There’s no other way to describe it. Over-saturated green trees and plants lined an almost neon green field. Tropical flowers stood out as little bursts of color. There was a small spirit house right by the porch, and every morning the owner of the guesthouse would come and light incense on it. Every manner of bird and lizard made its presence known, especially at night, when they made their presence known loudly. Directly beneath the porch was the koi pond, the same koi pond that the windows on the other side overlooked. It wound around half of the house like a little tropical moat. Hotels are usually these bland, sanitized things, places to sleep, jumping off points, but not really important or memorable. This guest house was just as important and memorable as everything else in Ubud. For four nights it felt like this little, blissful home. Not to get all "Eat, Pray, Love" (it is hard to talk about Ubud without bringing up that book), this little guest house spoke directly to my soul. It was peace. I think about it now and just feel a flood of longing for that peace, for this moment of time that was in almost every way perfect. 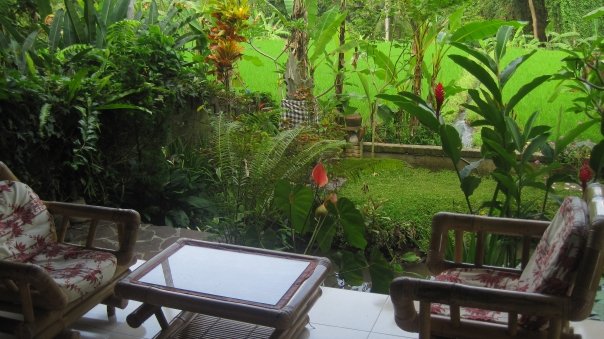 I wish I could have just an hour on that porch right now, an hour to sit in one of the comfy chairs, with a plate of fruit on the table in front of me. We spent so many hours on that porch. Sometimes I read and listened to the bugs and birds chirp around me. Other times I just sat and looked out at what was in front of me, nature in the highest definition. 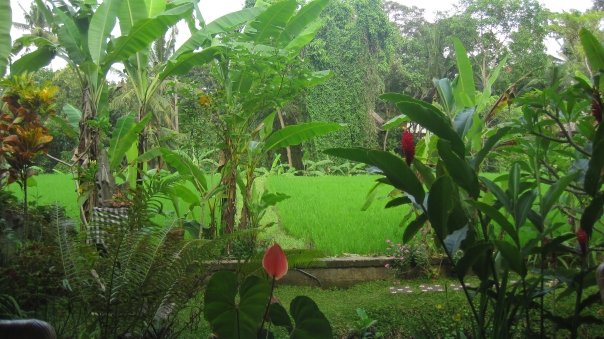 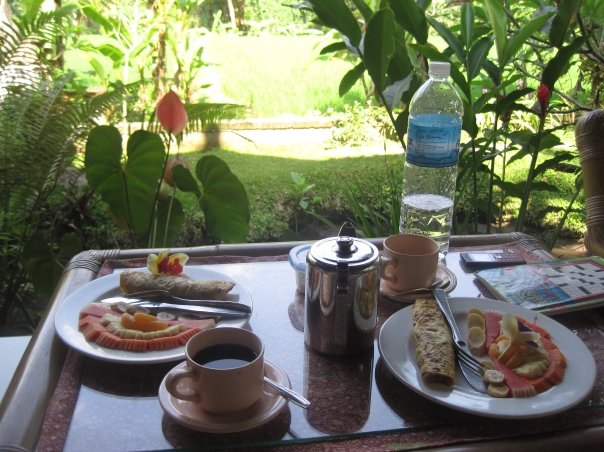 I could have been happy spending three days just on that porch, but of course there was beautiful, quirky Ubud, right outside our guesthouse gates.
But because this blog is already so long, I will have to leave Ubud for next time.
Posted by Unknown at 8:13 PM