I am in love with this man

Love, love, LOVE the show Modern Family. I will even go so far as to throw out Arrested Development when comparing it to other shows, and I can give no higher compliment than that. There are many funny things about this show but none more so than this man. 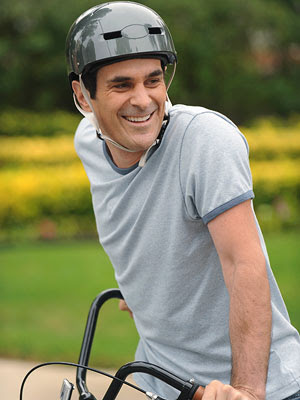 Phil, played by Ty Burrell (by the way where has this actor been all my life!?), is quite possibly my favorite television character of all time. He is the most joyful thing to watch, because the level of awkward, uninhibited, dorkitude, why it is simply a thing of beauty. He is Michael Scott divided by George Michael (the Michael Cera version, not the British singer). And if that doesn't intrigue you enough then here are a few choice Philisms.
"Cheerleading in my college was cool. The football players were so jealous they wouldn't even let me and my buddies, Trevor, Scotty and Ling go to their parties."

"Jay and I are buds, for sure, but with kind of um, an invisible, asterisk. Um, he's not the, he's not a talker, or, or hugger. Once he ran over my foot with his car. But in his defense, he had just given up smoking, but basically we're buds."

And my personal favorite:

"I am brave. Rollercoasters? Love 'em. Scary movies? I've seen 'Ghostbusters', like, seven times. I regularly drive through neighborhoods that have only recently been gentrified. So, yeah, I'm pretty much not afraid of anything. Except clowns. Never shared that with the fam' so sssh, I have an image to maintain. I am not really sure where the fear comes from; my mother says it's because when I was a kid I found a dead clown in the woods, but...who knows?"

Okay and if you're still not convinced that this man is anything less than perfect, here's a little more proof.