why this has been a good week

So I may have woken up on Sunday primed for a self-pity fest (for various reasons, none of which are very important or which I really care about anymore)-but several factors have contributed to make this week a really good one. In no particular order:
1) My dinner tonight-which features a new recipe I cooked for the first time Monday night: 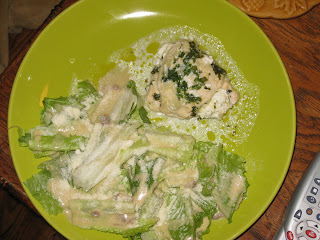 The new recipe was stuffed chicken, which I love but had never cooked before. It's actually super easy, especially because at Harris Teeter you can buy chicken breasts that are already pre- sliced to be super thin so you don't have to mess with that whole pounding chicken breasts with a mallet thing. So all I did was put some fresh basil (also a highlight of this week-today at Earth Fare I found live basil which you can buy-basically a basil plant with its roots submerged in water in a little plastic bag and which you can keep alive in your kitchen-awesome because I ADORE fresh basil; I think the best and most valuable thing I've learned about cooking thus far is that fresh herbs and dried herbs are absolutely not the same thing). So anywho you add about half a cup of basil, two cloves of garlic and some olive oil (I don't really know an exact amount-just whatever looks good) into a food processor-process it all up-and then you have a nice sauce to dress your chicken breasts with. You dress both sides, then spoon however much goat cheese you want onto the middle of the chicken breast. Then you just fold it up, wrap it in foil, put it on a baking sheet, stick it in the oven at 350 for 20 minutes and voila-yummy stuffed chicken breat. And super healthy too. Which is good because I'm attempting to go carb free, at least for every meal except breakfast. So that together with one of my weekly staples-romaine salad with my tasty homeade ceaser dressing (lots and lots of salty delicious anchiovies) made me very happy. And I don't have to hate myself in the morning for it-always a plus.
2) 30 Rock Season 2 on DVD-a bday treat-and I have already realized time and again that if I'm ever feeling blue for whatever reason-30 Rock is the best way to feel good again. Because Liz Lemon is the most relatable and realistic and coolest woman on television-or at least she is for me. Some girls might be able to relate to Blake Lively on Gossip Girl or even Pam Beesley on the Office, but my messy, disorganized, clumsy, wine swilling, always on the verge of falling apart self-well Liz Lemon will always be my personal hero.
3) Feeling like a real journalist. I finally bought a voice recorder after realizing that interviewing someone with a notepad and pen-despite being quaint and old fashioned-really isn't the best way to get accurate quotes. So I got a voice recorder (also a bday gift) and used it on a real life interview Tuesday afternoon (at a Starbucks no less) and well, it was awesome. I could actually listen to what my interviewee was saying, without worrying about writing everything down, and just having the recorder (and yeah this is geeky to admit), being able to carry it around in my purse, and being able to put it on the table during the interview, well it made me feel like a real journalist for well, the first time ever. A couple of freelance articles a month is hardly a full time job-but these tiny snatches I get of what my life could be like, make me really excited for the future. If somehow, I manage to pull my life together and actually make a career of this crazy thing called writing-well I've got a really good chance at being happy doing it-even if I end up writing about things like mountain biking or recently invented sports.
4) Sunday night's episode of Mad Men-if you haven't watched this show, please just On Demand it or ITunes it or Hulu it or do something to expose yourself to the brilliance that is Mad Men. It's devastatingly good. It's somehow poetic and insightful while always, primarily, being entertaining. The acting is fantastic. The cinemetography is consistently stunning. And if you care about none of that just tune in for the costumes and period detail-because it's all impeccable. It's one of those shows that I point to whenever someone has the audacity to say that television is meaningless or just fluff. Television, when done right, like Mad Men, can be the purest kind of art.
5) Jon Stewart's vendetta against Sarah Palin. He puts everything I feel into words and makes it funny. He takes all of the anger and frustration and turns it into comedy while never letting go of the undercurrent of visceral outrage. Sure it would be nice if we could politely converse all the time, but when Sarah Palin is out there talking about the "real America" and how certain, "small town" parts of the country are the only parts that have "real American values", well then politeness no longer cuts it. Jon Stewart is pissed. I'm pissed. We should all be pissed.
for whatever reason I couldn't embed this

6) The overall realization that it is impossible to feel sorry for yourself if you live in Charleston, because this is the view from my porch: 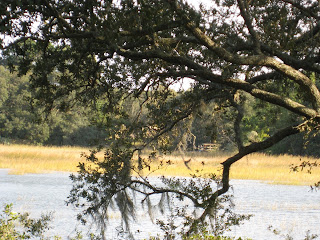 And on Sunday afternoon I went with my parents to Botany Bay Plantation-which has been privately owned until this year and is for the first time ever open to the public. At one time it was the largest plantation on the East Coast-and it feels that way. It's on Edisto Island and it might as well be the whole island-once you're inside the place you feel like you're on a completely different continent-a land of massive live oaks covered with spanish moss that grow side by side with palmetto trees, a land of marshes and salt air and dirt paths. You half expect Rhett Butler to come riding up at any moment. It's this unbelievable mix of old South plantation and desert island. The beach there alone is worth the 45 minute car trip. In a world of ocean front developments, of resorts and golf courses, the beach lining Botany Bay Plantation is a stretch of complete solitude. A tangly, wild forest towers over the shore which is covered with the biggest, smoothest shells you've ever seen. You can turn your head both ways and there aren't any houses. There aren't any hotels or shops or piers or mansions. There's just sand and trees and water. It could easily double for the beach in Lost. I've been to Rome, to Venice. I've been to the deserts of India and the mountains of the Himalayas. I've stood besides the Eiffel Tower and stood on the coast of Normandy. But I have yet to visit a place that exceeds the Lowcountry in beauty. And the fact that I live here-well how could I possibly feel sorry for myself for an extended period of time in a place like Charleston? 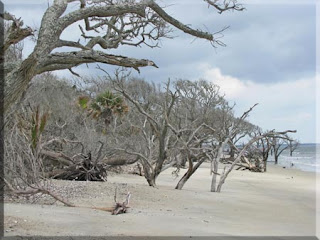